Former Real Madrid boss Jose Mourinho has set his sights on a trio of Bernabeu talents as the Chelsea manager look to step-up his summer spending.

CaughtOffside understands that the returning Stamford Bridge boss is eager to bring in further signings during the transfer window having thus far signed young talents Andre Schurrle and Marco van Ginkel and the Portuguese boss is ready to make a move for a number of Real Madrid players who could be surplus to requirements at the Spanish giants.

Re-elected president Florentino Perez is keen to bring in further ‘Marquee’ signings of his own and having already forked out in excess of £50m to bring in Spanish international pair Isco and Asier Illarramendi, as well as youngsters Daniel Carvajal and Casemiro, the La Liga side are keen to trim their squad in an attempt to balance the books. 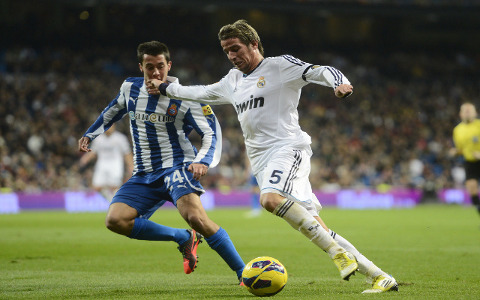 Jose Mourinho is ready to make an offer for Real Madrid wing-back Fabio Coentrao who is yet to return to pre-season training (though did start the club’s friendly victory over Bournemouth yesterday), resulting in speculation that the former Benfica man could be on his way out.

Coentrao has had something of an up and down time of it since moving to the Spanish capital in July 2011, with off field antics said to have angered the Real Madrid board who could be looking to sell the left-sided player who cost the club around £30m to sign.

Mourinho is a big admirer of the Portuguese international, hence his successful pursuit of the attack minded full-back whilst in charge of Real Madrid, and sees Coentrao as a long term replacement for Ashley Cole, who has one year to run on his current Chelsea contract.

The Chelsea boss is ready to offer up to £20m for the 25 year old and that may be a bid Real Madrid gladly accept, not least as Brazilian Marcelo is fighting fit after missing much of last term through injury.