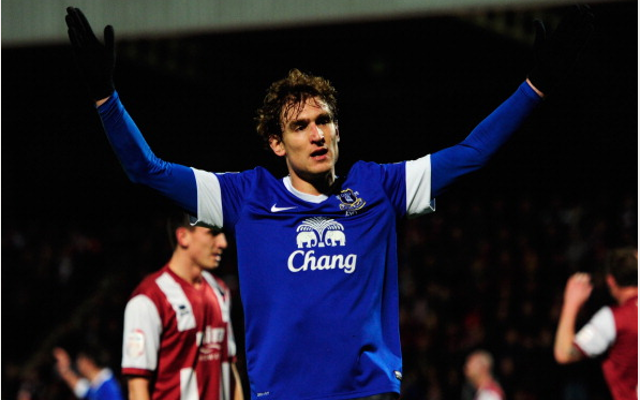 Croatian striker could be set for Bundesliga.

German side Hamburg are understood to preparing a move for Everton striker Nikica Jelavic according to The Daily Mail.

The Croatian forward arrived at Goodison Park in blistering form following his signing from Glasgow Rangers a couple of seasons ago.

He instantly became a hit as his finishing remained clinical and his goals propelled Everton up the Premier League table.

But that did not last as Jelavic struggled to hit the back of the net last season. He eventually found himself being dropped from the starting eleven in favour of Victor Anichebe and made no secret of the fact that he wanted to play first team football.

There were suggestions he could leave the club this summer but the departure of David Moyes, and the arrival of his replacement Roberto Martinez, offered Jelavic hope of a fresh start at Everton.

But Martinez has since gone out and bought Aroune Kone from Wigan, prompting renewed fears from Jelavic that he may be forced to sit on the bench.

That could pave the way for a move to the Bundesliga, with Hamburg reported ready to offer £6 million for his services.

Martinez may decide to cash in on the player, and use the money to bring in new signings as he looks to put his own stamp on the Everton team.