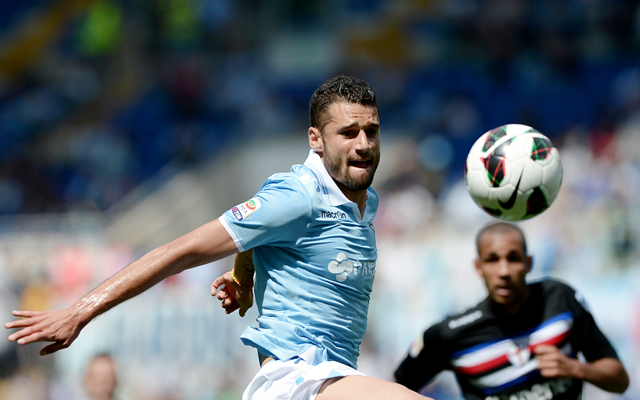 Serie A side insist midfielder is going nowhere.

Lazio President Claudio Lotito has insisted that any clubs interesting in landing the signature of Antonio Candreva would be better off looking elsewhere as the Roman based club won’t be selling him anytime soon, Sky Sports reports.

The 26-year-old impressed last season with a string of fine performances and caught further attention following a strong showing at the Confederations Cup last month.

A number of clubs are thought to be lining up to take a closer look with Napoli believed to be leading the charge. However, Manchester United have also been credited with an interest after they missed out on Barcelona midfielder Thiago Alcantara who turned his back on a move to the Premie League champions by joining Bayern Munich instead.

And Lotito has insisted that the club will not be entertaining the thought of selling on their best players as they look to build on the good form of the last campaign to enjoy an even stronger finish this time around.

At a press conference, when asked about the possibility of selling the Italian international he replied: “He’s not for sale.

“Napoli? They have never called me, but if they do, I’d say he’s not for sale.

“Lazio are the only club who have bought players without selling,” he added.

“We wanted to strengthen the team again. I can also say that we have achieved all the market targets we had.”

Candreva is currently co-owned by fellow Serie A side Udinese, but has spent the past two seasons on loan with Lazio where he has scored a total of 10 goals in 64 appearances.