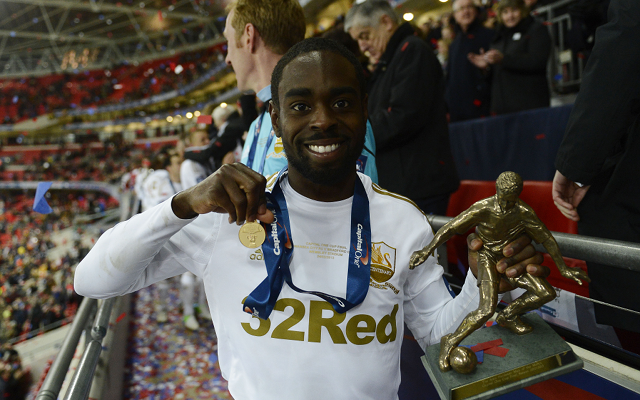 Swansea City winger Nathan Dyer is hoping to sign a new deal with the Welsh side but is not worrying about his future should it not happen anytime soon, Sky Sports reports.

The 25-year-old was a key figure in the club’s success last season, making 44 appearances as he helped them to a Capital One Cup victory as well as a respectable ninth placed finish in the Premier League table.

He has, though, been linked with a £5 million move to Everton in recent weeks as Roberto Martinez looks to bolster his squad by taking advantage of the fact that Dyer has just one year remaining on his current deal at the Liberty Stadium.

However, preliminary talks are underway between the Swans hierarchy and Dyer’s agent, and although the player himself has insisted that he is focussing on his pre-season form and fitness, he is keen to put pen to paper.

“Swansea are a great club and I’ve always felt at home here, so I hope something can get sorted out soon,” Dyer told the Daily Mirror.

“I don’t think about my contract situation too much – I just try and play football.

“I’m really happy at Swansea. Every year since I’ve arrived, we have improved and improved. It’s been great to be part of the rise of Swansea.”

Dyer began his career with Southampton back in 2005 and he joined up with the Swans in 2009 after loan spells with the likes of Burnley, Sheffield United and Swansea themselves.