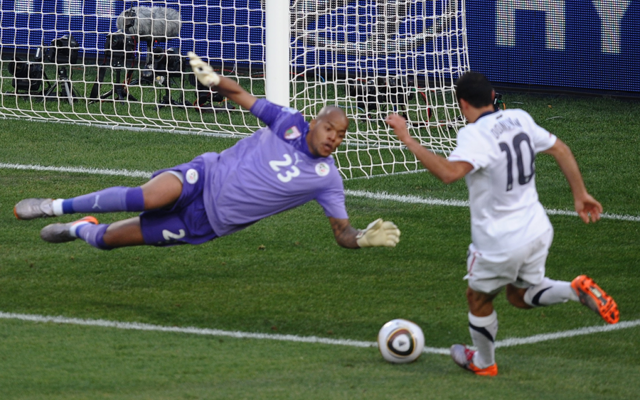 Russian based goalkeeper on English radars.

A number of Premier League and Championship clubs are said to be interested in Algerian international goalkeeper Rais M’Bolhi, according to Sky Sports.

The 27-year-old is currently on the books of Russian outfit Krylia Sovetov, though he has spent much of the past two seasons out on loan in France with Gazélec Ajaccio and Bulgaria with CSKA Sofia.

He is an established international with Algeria, collecting 21 caps since making his debut three years ago and will be best remembered by English fans as the man who kept a clean sheet against them during the goalless draw between the two at the 2010 World Cup.

The 6″3′ stopper is also familiar with football on these shores after taking in a short loan spell with Scottish side Hearts back in 2006, however he failed to establish himself in the Tynecastle set up and left a season later. But he could now be on his way back to the UK after his agent confirmed that a number of English sides are weighing up a move for him.

Menzo Messaoudi of De Villiers Business Group told Sky Sports: “Rais is looking for a new challenge and his availability has alerted a few clubs in the Premier League and Championship as well as a few other European clubs.

“He is athletic, a serious trainer and has the burning desire to succeed at the highest level possible. We will see what happens in the coming weeks.”