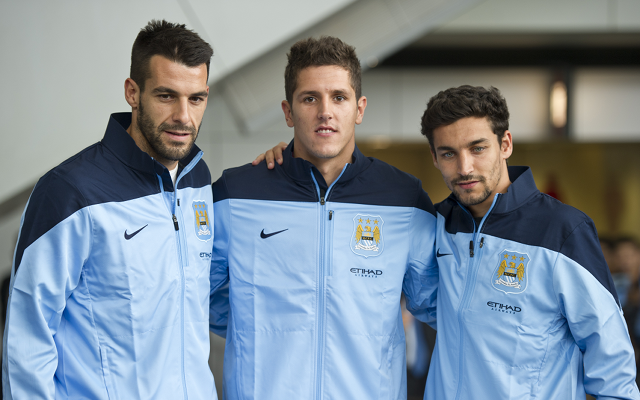 City new boy not concerned about past problems.

Spanish winger insists he is settling in well at City.

Manchester City winger Jesus Navas has insisted that he is well and truly over the homesickness that once threatened to end his career before it had even begun whilst at Sevilla, the Daily Mail reports.

The 27-year-old joined up with City last month amidst fears of how long it would take him to settle after being a well known sufferer of acute homesickness.

He would suffer with panic attacks when he was younger, and they didn’t improve when he joined his local club, Sevilla, at the age of 15 where he frequently opted out of pre-season tours and once had to be collected from a training camp an hour away by his father and brother.

Call-ups to the national team were also spurned too, due to a fear of travelling before he underwent  counselling for the problem and became both a world and European champion with Spain.

Three years ago he rejected the chance to join Arsenal, and it looked as though his chance of joining a Premier League side had passed until Manuel Pellegrini managed to convince him to link up with the Manchester outfit.

However, he has now insisted that he is over the problems now and is looking forward to getting on with his career at the Etihad.

“It was a few years ago now,” he said. “It’s all in the past and I’ve moved on, otherwise I wouldn’t be here. I’m ready for this.

“All everyone keeps telling me is that the weather in Manchester is terrible, very different from Seville.

“I have a wife and young baby, and having them with me in England will help me settle.

“My teammates will help a lot as well, but this is something that I really want. I’m here to play football and achieve really big things. So that is driving me to adapt here to the football and the culture. I plan to learn the language quickly.”