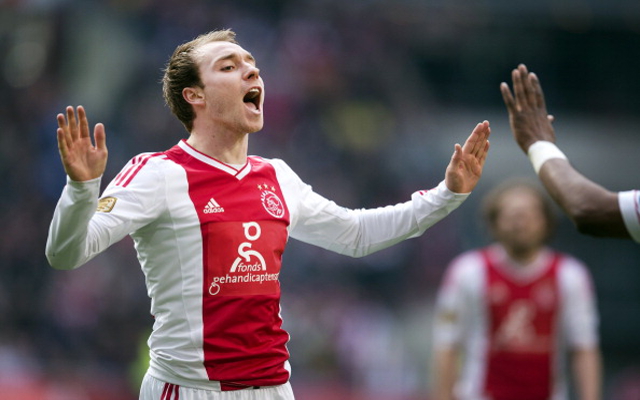 Reds now have enough quality creative attackers in their side without needing to sign the Dane.

Liverpool have decided to end their long-running interest in highly rated Ajax midfield player Christian Eriksen, according to reports in the Daily Mail.

The Merseyside giants have been keeping close tabs on the exciting Denmark international for over a year now, with a view to possibly bringing the playmaker to Anfield this summer.

The Reds were believed to be in a straight two-way fight with Uefa Champions League runners-up Borussia Dortmund for the 21-year-old’s signature and with Eriksen’s current contract at the Amsterdam ArenA set to run out on June 30 2014, the player was expected to be available for as little as £15 million this summer.

However, Liverpool head coach Brendan Rodgers has now opted to withdraw the Reds’ interest in the Dane so as to concentrate on other more important areas in the team that need strengthening, with Liverpool already well stocked with creative attacking midfield players at Anfield in the form of Philippe Coutinho, Jordan Henderson and now new signing Luis Alberto.

And despite Eriksen scoring an impressive 30 goals in his 156 matches for the Eredivsie champions since making his debut for the Dutch giants in January 2010, Rodgers confirmed earlier this week that the club were now only looking to strengthen “at the top end of the field”, as well as finding “cover in the left-back position”.