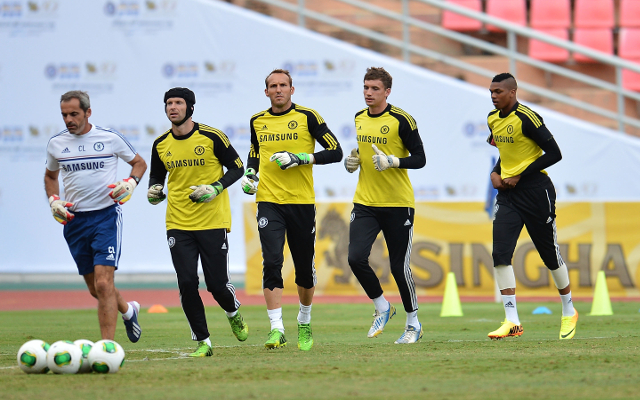 Veteran Aussie wants one last shot at the big time.

Veteran Chelsea goalkeeper Mark Schwarzer has admitted that he intends to take any chance he is given this season to impress and finally win something with a big club, the Mirror reports.

The 40-year-old Australian international made the shock switch to Stamford Bridge earlier this month after being released by fellow west London rivals Fulham at the end of last season.

He had linked up with the squad just in time to fly out to the far east for their pre season tour where he has already featured, and he will likely be given a further 45 minutes in this weeks encounter with the Indonesian All Stars in the Gelora Bung Karno Stadium.

He nearly joined London rivals Arsenal three years ago as they searched for a replacement for Manuel Almunia, but Arsene Wenger’s men refused to stretch just that little bit further to wrap the deal up.

”When I moved to Fulham I thought that was it as far as playing for a really big club,” he said.

”Then the Arsenal thing popped up. After that experience I said ‘Never say never’. Now it’s proven to be true.

”It was out of the blue for everyone else but I knew of some interest a while. Towards the end of the season it moved on pretty quickly and I made a decision after speaking to the manager and the rest is history.

”I had a conversation with the manager and he told me his intentions for the season and he said to me ‘It’s an unbelievable club’.

”It was a great opportunity to join such a fantastic club so I decided to give it a go and after I spoke to the manager I didn’t think twice.

”Before I’d spoken to him I had some doubts but once I spoke to the manager those doubts disappeared pretty quickly.”

Schwarzer knows that he is only to be a stop gap between established number one Petr Cech and loanee Thibaut Courtois, but he has insisted that he will take any chance to shine with both hands.

”Not being No 1 means there’s going to be an adjustment of course but I think the amount of games Chelsea play there is going to be opportunities to play games – and that’s also important for me.

”Petr is a great goalkeeper and a good guy. He has been extremely accommodating for me since I arrived and it’s been great to work alongside him.

”I think there is a distinct difference in our style. Hopefully I can learn from him and maybe he might learn from me too. I think we can complement each other very well.

”Without a doubt, you are here to win. There are four competitions and you want to win all four if you can.

”And I feel incredibly well. They say the older you get you say that because you are trying to hide your age.

”But I am not trying to hide my age. I am 40 but I feel incredibly well and I am holding my own, no problems whatsoever. I feel incredibly fit and I love playing football. As long as I am playing well enough at this level I will continue to play.”