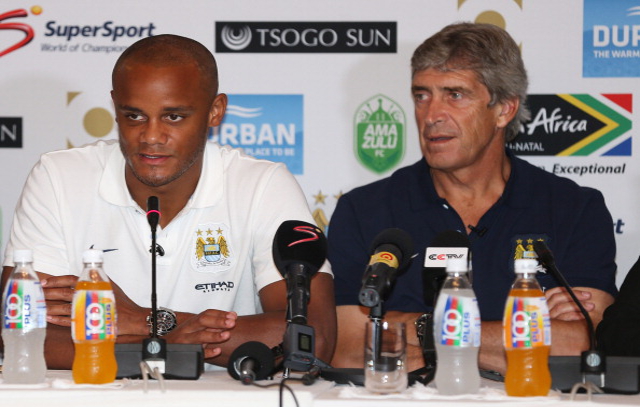 Manchester City captain Vincent Kompany has laid down the challenge to the club’s rivals this season by insisting that the squad looks sharper than ever and has the right attitude to mount a sustained challenge for the title, the Mirror reports.

The Belgian international also believes that he and his teammates have discovered a new found hunger and desire to bounce back from last season’s disappointing campaign and go the distance this time around.

He carried on to say that they all knew that they let their standards and work ethic drop last season, but they have learned their lesson and will now seek to take the title back off neighbours Manchester United.

“I think anyone involved with the club knows we didn’t do enough last year,” said the defender.

“I can see a team that means business and that’s a great thing for me to see. There’s just a sense in the team, you can sense the players are still hungry

“There’s a great group atmosphere and this is the sharpest I’ve seen the team in a long time.”

Kompany also praised new boss Manuel Pellegrini’s approach and insisted that he rest of the players have responded positively to his methods, and though he may not have the same charisma as former boss Roberto Mancini, Kompany thinks that he will bring a style of his own into the club.

“There’s a certain flair to his methods,” said the Belgian star, speaking ahead of today’s clash against South China in the Premier League Asia Trophy in Hong Kong.

“He looks like a very decent human being. We’ve trained really hard and adapted to his new style.

“What he’s done so far, he’s done with a lot of class. For a group who wants to push themselves, it’s a good thing.

“I think everybody in the team is hungry to learn. We have to be better than last season, so we have to learn and improve.”