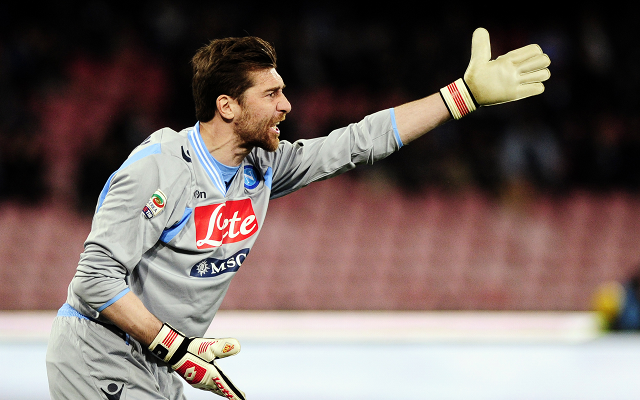 The 36-year-old has spent the past four seasons with the San Paolo outfit, but believes that his chances to impress will come few and far between now that Reina puts the finishing touches on a season long loan with the club, prompting the six-cap international to seek a new challenge with Rudi Garcia’s Roma.

After leaving Napoli’s Dimaro training camp to fly to Rome’s Fiumicino airport, he told La Repubblica Sport: “It’s all agreed. I’m here to work hard and to have a great season.

“Have I spoken to the coach yet? Yes.”

De Sanctis will likely be the first choice replacement for Maarten Stekelenburg after the Dutch international left the Giallorossi to take over from Mark Schwarzer at Fulham.

De Sanctis began his career at Pescara in 1994 where his good performances earned him a move to Juventus. However, he failed to establish himself in Turin and moved across the north to Udinese where he made over 200 appearances during a seven year spell. Stints with Sevilla and Galatasaray proved fruitless before moving back to Italy with Napoli in 2009.