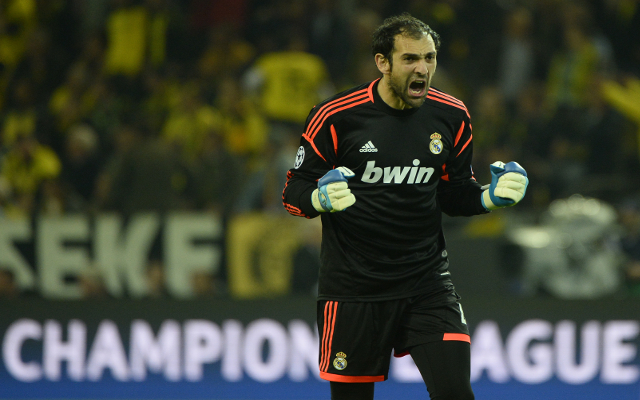 Gunners set to launch shock move for Casillas’s understudy at the Bernabeu.

Arsenal head coach Arsene Wenger has decided to turn his attentions towards experienced Real Madrid shot-stopper Diego Lopez to fill the problem position at the Emirates next season after missing out on both of his first-choice keeping targets this summer.

The Frenchman made bringing in a new goalkeeper his main transfer priority of the summer after finally losing patience with current Gunners No 1 Wojciech Szczesny last season.

The Poland international was dropped by Wenger for the north London club’s crucial trip to take on Bayern Munich in the second leg of their Uefa Champions League round-of-16 clash at the Allianz Arena last March, with his manager claiming his keeper had become “mentally fatigued”.

As a result, Wenger has since been scouring the Continent in search of an experienced shot stopper to come in and provide much-needed competition for his young Pole in the capital next season.

Initially, the Frenchman had wanted to sign Queens Park Rangers’ Brazil international Julio Cesar, with the recently relegated Premier League club known to be desperate to offload the 33-year-old in order to remove the player’s exorbitant salary from their wage bill.

The Arsenal boss, though, then changed his mind about Cesar and switched his focus towards unsettled Liverpool No 1 Jose Manuel Reina, only for the Spain international to instead opt to be reunited with his mentor Rafa Benitez at Napoli.

However, during the Gunners’ ultimately failed negotiations to sign Madrid front man Gonzalo Higuain, Wenger was made aware that new los Blancos trainer Carlo Ancelotti was happy to let Lopez leave the Santiago Bernabeu this summer now that club captain Iker Casillas has fully recovered from the broken hand he suffered last season.

And with Wenger having been hugely impressed by Lopez’s displays between the sticks for the Spanish giants in their run to the semi-finals of the previous campaign’s Champions League, the Arsenal coach is now ready to make his move for the 31-year-old goalkeeper and offer the Spain international the opportunity to play regular first-team football in north London next season rather than warm the bench at the Santiago Bernabeu.