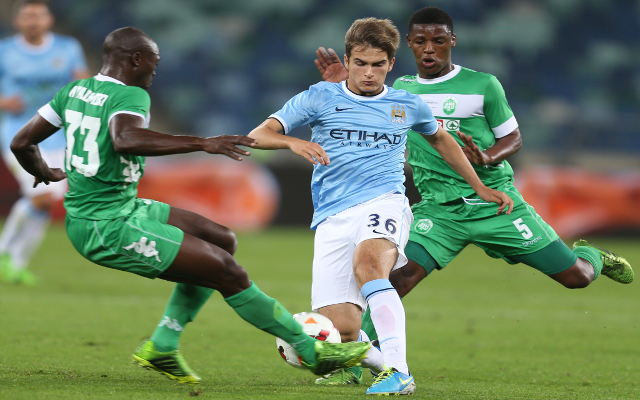 Barcelona are plotting to launch a £3.5million offer for Manchester City’s promising young striker Denis Suarez according to the Daily Mail.

The 19-year-old, who joined City from Celta Vigo in 2011, hasn’t yet made his Premier League debut at the Etihad Stadium but he is still highly thought of at the Manchester club.

Before he made switch to England two years ago there was interest from the Camp Nou in the Spain U-20 international and reports today suggest that the Catalan side could now move again for Suarez.

His fine performances at this summer’s Under-20 World Cup in Turkey has attracted attention from a host of European clubs but Barca lead the pursuit as they think he would be a perfect fit their philosophy.

Barcelona now want the attacking midfielder to feature for their B team next season as they look to develop him into a fully-fledged Blaugrana star.

However they could face fierce competition from fellow Spanish sides including Espanyol, Valencia and his former club Celta Vigo who all want to take the youngster on-loan for the season.

It was believed that new City boss Manuel Pellegrini would give the bright prospect a chance in the Citizens first-team during the new season as he often did with young talent at Malaga in La Liga.

And the playmaker has already featured for the side during their pre-season tour of South Africa. But with just a year left on his contract, City could be prepared to let the youngster leave if an appropriate offer is received.