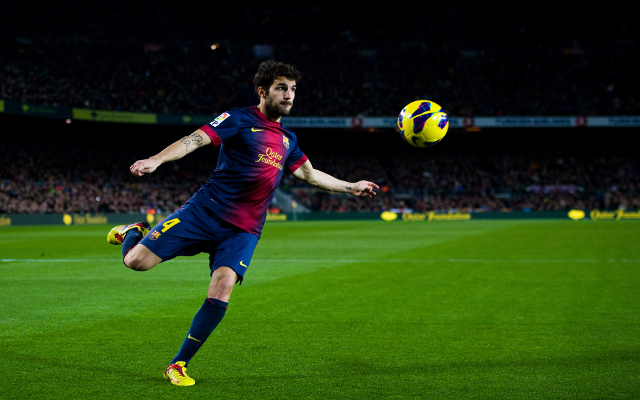 Barcelona midfielder Cesc Fabregas has agreed to join Man United according to the Daily Express.

The 26 year old has been the subject of two failed bids from the Premier League title holders, the second of which was thought to be in the region of £30m, and now the Spanish international has indicated his desire to make a return to the English top tier.

Fabregas’s agent Darren Dein has met with Man United executive vice-chairman Ed Woodward during which it has transpired that the former Arsenal man has made it clear he wishes to join Man United.

Dein has reportedly informed Woodward that whilst Arsenal have ‘first option’ on their former captain Fabregas wants to move to Man United, where he would team up with former team-mate Robin Van Persie.

Fabregas is happy with personal terms reached with Man United and it is now down to whether incoming Barcelona boss Gerardo Martino will stand in the way of the midfielder’s Nou Camp departure, to which end the player is willing to make a transfer request to force through a move.

Fabregas has enjoyed a moderately successful return to Barcelona, scoring 29 goals and providing 32 assists in 96 appearances for the Catalan side. The attacking midfielder was however dropped for big Champions League encounters with PSG, AC Milan and Bayern Munich last season and perhaps new boss Martino is willing to cash in on a player he may feel he can afford to sell.

David Moyes will be looking to freshen up his midfield having seen Paul Scholes retire and Darren Fletcher continue to fight his way back to full fitness after a lengthy period out with a long term illness the former Toffees boss has also been linked with interest in his former Everton charge Marouane Fellaini and Newcastle United’s Yohan Cabaye.