Arsenal are reportedly closing in on a deal to sign Liverpool striker Luis Suarez as the North London side prepare to launch a British record bid of £51m for the Uruguayan.

CaughtOffside understands that the Emirates Stadium side are willing to mount a final offer for the 26 year old Anfield star, having failed with bids of £30m and £40m and £1, the fee needed to trigger a clause that allowed Arsenal to discuss terms with Luis Suarez, and are now set to make a mammoth offer for Suarez, one that Liverpool will struggle to turn down.

Arsene Wenger is said to have been handed a £70m transfer war-chest at the beginning of the summer and has added to that fund by trimming his squad and is ready to use the lions share of the funds handed to him by the club’s board on one major target.

This is due in part to Wenger being pleased with his side’s efforts in pre-season which have led the French manager to be of the opinion that the club’s need for a prolific striker is more urgent than looking to improve any other area of his squad.

Arsenal fans will have been surprised by the size of bids their club has made in pursuit of Luis Suarez but efforts to pursue a player of the Liverpool striker’s calibre, as well as apparent interest in the likes of Gonzalo Higuain, Marouane Fellaini, Wayne Rooney and Brazilian starlet Bernard, will count for nothing if they are unable to secure actual purchases of said talents.

Suarez is known to be keen on a move to Arsenal and a deal is reportedly on the table to the tune of £150k a week, a sizable increase of the club’s current wage ceiling, and Wenger is keen to not see their advances fail, knowing that a failure to sign a ‘Marquee’ addition will lead to the repeated refrain that the Gunners lack ambition when it comes to investing in the transfer market. 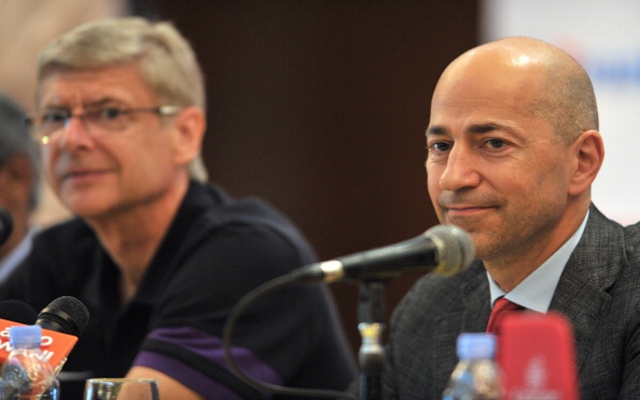 Arsenal are in a very strong financial position, a recent study in magazine Forbes states that the club is the fourth most valuable football team in world football behind Real Madrid, Barcelona and Man United, and this is due in no small part to an intelligent business model that has made it viable for Wenger to make such an offer for Luis Suarez.

Wenger hopes to line up Suarez in a three pronged attack which would see the former Ajax man flanked by Lukas Podolski and Theo Walcott, the potential missing piece of a jigsaw puzzle that could perhaps instantly transform a side that has gone eight seasons without securing any silverware to one that genuinely challenge for the Premier League title.

Suarez scored 30 goals in all competitions last term but as well as netting regularly the Liverpool striker offers a great of support for those around him and as a proven Premier League marksman he is a player Wenger is willing to take the calculated gamble in the form of a mammoth investment he hopes will pay rich dividends in the short and medium term.

The nature of the bid will also seek to end any interest Liverpool hold in looking to secure a portion of any potential re-sale of the player, an amendment which Arsenal are not willing to include in any deal for Luis Suarez.

Such a move would be an astonishing statement of intent and a sign that Arsenal believe that the managerial changes at Man United, Chelsea and Man City could create the level of uncertainty and change at those respective clubs that could offer the Emirates Stadium side an extra edge over their rivals.