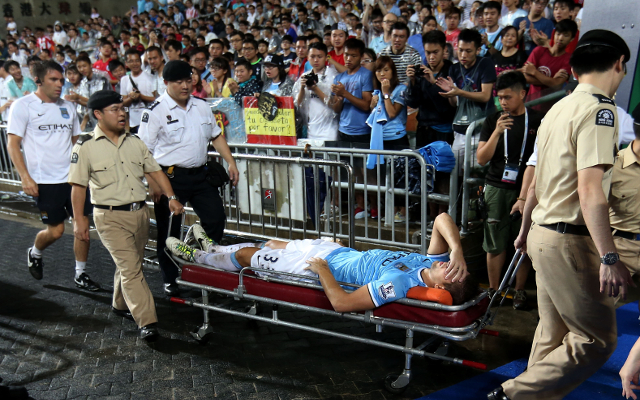 Sebian was a revelation at the back for the club last season.

Manchester City are waiting to discover the full extent of the injury to defender Matija Nastasic after the Serbian was stretchered off in the final of the Barclays Asia Trophy on Saturday, says the Mail on Sunday.

The centre back suffered a knock to his ankle during the Blues’ win over Sunderland in Hong Kong in a match that was once again played in dreadful conditions following yet another huge downpour just prior to kick-off.

Tottenham Hotspur central defender Jan Vertonghen also suffered an ankle injury playing in the pre-season tournament earlier in the week, with the Belgium international now likely to be out of action for as long as three to four weeks after it was confirmed that he had suffered ankle ligament damage.

However, recently appointed City head coach Manuel Pellegrini was not critical of the rain-sodden pitch when he spoke to the media after his side’s win, claiming that Nastasic’s ankle injury had actually been caused by a kick he had suffered during the game rather than due to the on-pitch conditions.

“No I don’t think the pitch was part of it, it was part of the game,” said Pellegrini. “It was a kick not the pitch.

“I can’t tell you more now, the doctor has to see him tomorrow when we arrive in Manchester. I’m concerned but it’s better to wait.”

The Chilean will want the 20-year-old back to full fitness as soon as possible though after the outstanding debut campaign that the Serbia international enjoyed last season following his 15 million euros move from Fiorentina, with Nastasic featuring in 25 matches in total at Eastlands, including in 18 Premier League games.