Petke was snapped doing his bit for the fans’ entry into the upcoming Red Bull Flugtag.

He’s been photographed in what looks like his back garden, doing some very casual DIY (please don’t ever wear flip-flops whilst using powertools, kids).

It turns out that he’s helping NYRB supporters club Viking Army SC with their entry into this year’s Red Bull Flugtag competition.

The contest, held annually by Red Bull in several countries around the world, invites Average Joes to construct their very own personal gliders. Contestants then attempt to fly their creations from a rolling start off of a pier and over a body of water, with the winner being the pilot who flies their craft the furthest.

Here’s hoping that Petke elects to pilot the finished model – check out his work in progress below: 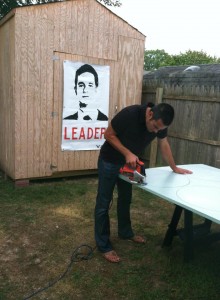