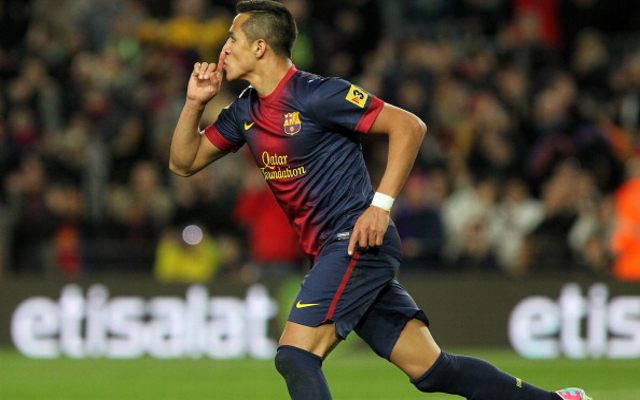 The winger has struggled to hold down a starting spot in the Barcelona first team since his move from Udinese.

Barcelona winger Alexis Sanchez is determined to stay at Barcelona and break into the clubs first team despite several Italian clubs wanting to bring him back to Serie A, Marca reports.

Napoli are the latest side to be interested in signing Sanchez, with the Serie A runners-up ready to pay 20 million euros for the Chilean.

Italian Champions Juventus are also interested in the player, who had a highly successful at Udinese before he moved to the Nou Camp.

However, despite the interest from clubs in Italy, Sanchez is determined to succeed at Barcelona and has been working hard to impress new manager Gerardo Martino.

“I trust in my abilities, but I need to keep fighting for a spot”, the player explained yesterday.

Sanchez will have a hard job trying to break into the Barcelona’s first team next season following the clubs big money signing of Neymar but the Chilean has welcomed the arrival of the talented Brazilian at the Nou Camp.

“He’s finally here. We’re happy at the club because we were waiting for him to arrive to help us get out there and win everything,” Sanchez said.

Several Premier League clubs were also thought to be monitoring Sanchez situation at Barcelona, including Arsenal, but they will now have to move onto other targets following the Chilean’s comments.