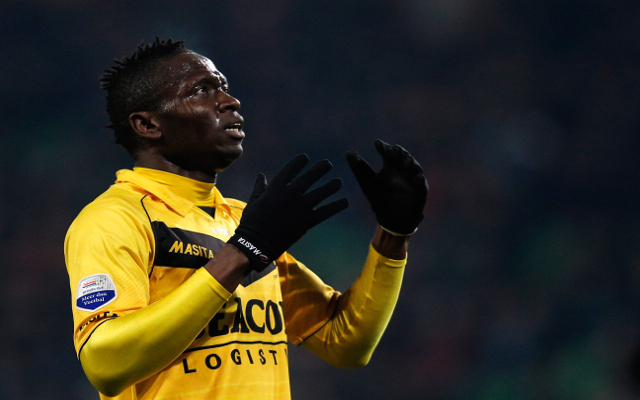 A number of Premier League clubs are tracking the progress of highly-rated VVV-Venlo striker Uche Nwofor, according to the Daily Star.

London clubs Tottenham and Arsenal, along with Newcastle are chasing the Nigerian forward, who scored ten goals last season for the Dutch side. Dubbed ‘the new Christian Benteke’, Nwofor combines size, pace and finishing ability into one, making him one of the most sought-after young footballers on the market.

The 21-year old is a reported target for Arsenal, as they continue their search for a striker partner for Olivier Giroud. As a bid to sign Luis Suarez from Arsenal, and missing out on previous targets Gonzalo Higuain and Stevan Jovetic, Arsene Wenger has identified £6million-rated Nwofor as a developmental prospect to add to his talented youth-ranks.

Tottenham are also keen on signing Nwofor as they prepare for the exit of Gareth Bale. With Emmanuel Adebayor and Jermain Defoe both being linked with moves away from the club this summer, Spurs are tracking the progress of the Venlo forward as they continue their search for a top-quality attacker. They are also reportedly closing in on the £26million signing of Valencia forward Roberto Soldado.

Newcastle are also keen on signing the Nigerian, as a potential deal to sign Batefembi Gomis from Lyon stalls as the clubs struggle to agree a fee. Newcastle are also in the running to sign wantaway QPR striker Loic Remy, but they face a challenge from West Ham.