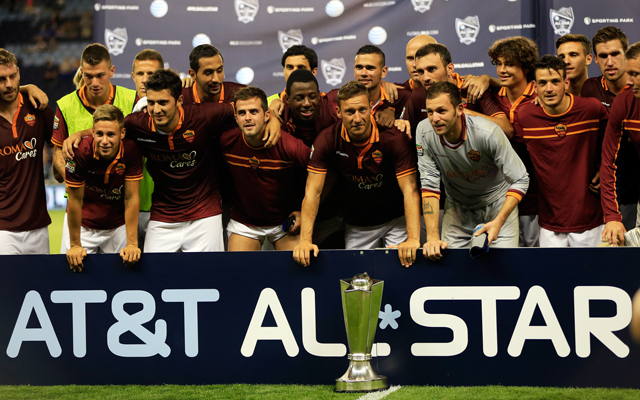 A late goal saved some face for an All-Star side that was outgunned from start to finish.

The MLS All-Stars were thoroughly beaten by a strong AS Roma side Wednesday night in Kansas city three goals to one.

MLS fans wanting the visitors to treat the game seriously may be eating their words after goals from Alessandro Florenzi, Gadji Tallo and an Aurelien Collin own goal emphasised the Romans’ dominance. Omar Gonzalez struck back with a late header in stoppage time for the All-Stars.

“The team played very well and I’m really happy for the third goal which was a collective goal by my team,” Roma manager Rudi Garcia said in the post-match press conference to MLSSoccer.com. “There is more work to do because we’ve not been able to keep a clean sheet.”

Roma’s determination was made clear for all to see before the match had even begun. In the two days prior to kickoff Rudi Garcia’s side managed to fit in three training sessions, versus the All-Stars one. Combine that with the existing familiarity within the Roma camp and it’s no wonder that the side bossed the game so comfortably, particularly in the midfield.

“They played today with fatigue and tired legs,” Garcia said. “It’s important that when you don’t have the legs, this requires you to play with your head. And they did that today.

“I was very happy with my midfield with Kevin [Strootman], Michael [Bradley] and Miralem [Pjanic],” Garcia said, “For me the midfield is the heart of the game. It’s the heart of the team and the heart of my game. Obviously, that’s why I need several good players in my midfield. Sometimes it’s better to have choices even though it’s more difficult than not having any.

“These are midfielders that know how to change positions and today you saw Kevin, Michael and Miralem that they are capable of pushing forward. You need complementary midfielders and to look for ways to make life complicated for the opponents.”

Garcia was right to be pleased with his midfield trio’s efforts. Pjanic and Strootman combined excellently for the first goal, culminating with Strootman’s shot taking a cruel deflection off of Aurelien Collin to beat Raul Fernandez at his near post.

Strootman was involved in the third goal too, this time with Michael Bradley. The USA international’s pass to Strootman was fed in to youngster Tallo to seal the game for the visitors.

“I thought there were a lot of good things,” Bradley said in the post-match presser. “Clearly there’s still a lot to work on but there’s time for that. We’re moving ourselves in the right direction.”

Roma’s strength in midfield and all-round technical proficiency was proven in the match stats – of 570 passes played, the Giallorossi incredibly only misplaced 22.

All-Stars head coach Peter Vermes was more casual in his post-match presser, despite his side’s defeat. “When you compete against these guys week in and week out, you don’t really get a chance to know them the way I got a chance to get to know them this week, Vermes said. “Intimately talking about different things – what they think, how they go about their business, their professionalism. Class group of guys.”

See all the match highlights below: