With Arsenal’s move for Liverpool striker Luis Suarez stuttering Arsene Wenger has elected to shift his attention to Serie A and is readying a big money move for highly rated Roma forward Erik Lamela.

CaughtOffside understands that the Gunners boss scouted the Argentine for portions of last season and glowing reports he has received has led Wenger to request his board to finance a €30m (£26m) bid for the 21 year old, a bid that the Stadio Olimpico side could struggle to turn down.

Roma, under new manager Rudi Garcia, have invested heavily in their squad this summer spending upwards of £35m to bring in a raft of quality additions including Dutch international Kevin Strootman, Udinese defender Mehdi Benatia, Croatian wonderkid Tin Jedvaj as well as Man City full-back Maicon and though a fair chunk of that outlay was covered by the sale of Marquinhos to PSG there may still be an imperative to balance the books. 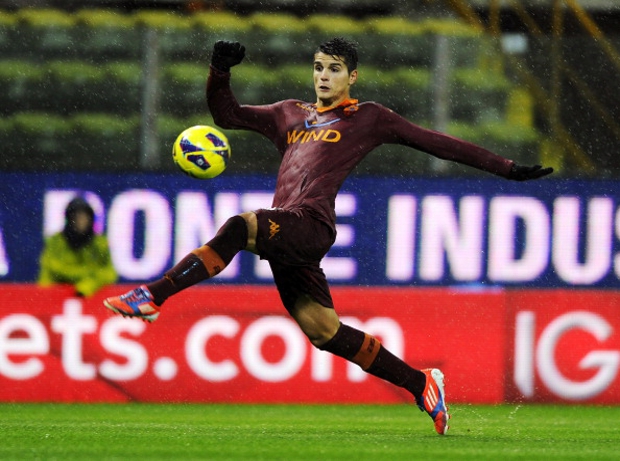 Having failed to even secure a Europa League berth for 2013/14 Lamela may well be tempted by a move to Arsenal and Arsene Wenger hopes to bring in the former River Plate man, who can play either out wide or in a central striking role and it is in this position that the Arsenal boss hopes to use the cultured forward.

Lamela came of age last term, scoring 15 goals in 33 Serie A appearances and forcing his way into the Argentine national team set-up, and Arsenal’s main rivals in pursuit of the Buenos Aires born marksman are North London rivals Tottenham with Andre Villas-Boas already making plans to spend the massive sum the White Hart Lane side are due to receive for prized asset Gareth Bale.

However Wenger is confident he can see off the challenge from Arsenal’s Premier League competitors, chiefly due to being able to offer Champions League football this season.

Arsenal are ready to offer Lamela a five year contract and a £110k salary that is a significant increase on his current Roma pay packet.

Having lost out in the pursuit of Gonzalo Higuain and with hopes of persuading Liverpool to accept £40m for Suarez, Wenger is mindful of losing out on another target and with the new season firmly on the horizon the French boss is keen to bring in Lamela to strengthen an attack that is in need of improvement.