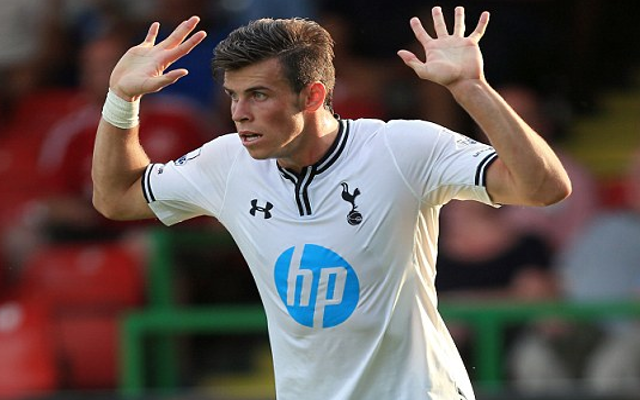 White Hart Lane side ready to punish Welshman for non-attendance.

Tottenham are ready to hit Gareth Bale with a club fine if he fails to return to the club for training today according to the Daily Mirror.

The 24 year old Welsh international is said to be “unhappy and disappointed” as Tottenham’s stance over an apparent bid from Real Madrid for his services, with the Spanish giants reportedly ready to fork out a massive £105 to land the White Hart Lane star.

Bale pulled out of Tottenham’s friendly against AS Monaco, which Andre Villas-Boas’s side duly lost 5-2, and there is growing speculation over the attacker’s future at the North London club.

Real Madrid are clearly keen on bringing in the talented Premier League star and are ready to break the world transfer record in order to ‘get their man’, however Tottenham chairman Daniel Levy is standing firm on the issue and the long protracted saga could well continue all the way up until the transfer window closes in September 2nd.

Bale had an outstanding campaign in 2012/13, scoring 26 goals in all competitions and winning both the PFA Player and Young Player of the Year awards in the process.

Amid the turmoil over Bale’s future Andre Villas-Boas has managed to do some very good business during the summer, bringing in Brazilian midfielder Paulinho, Belgian winger Nacer Chadli and spending a club record fee on Valencia striker Roberto Soldado.