Emirates Stadium on alert as legendary striker is made available for immediate sale.

Arsenal are reportedly keeping a close eye on developments at Russian Premier League side Anzhi Makhachkala as they look to dramatically cut costs with Arsene Wenger apparently hoping to win the race to sign prolific Cameroon international Samuel Eto’o according to Spanish source El Confidencial.

Anzhi have put up their entire squad for sale as the club look to balance the books and one would imagine that Eto’o would be one of the first to be shown the door given that the former Barcelona man is by some distance the biggest earner at the Dagestan based club.

Arsene Wenger has been linked with numerous potential striking additions from Wayne Rooney to Gonzalo Higuain and Luis Suarez but perhaps the chance to bring in Eto’o will pique his interest. 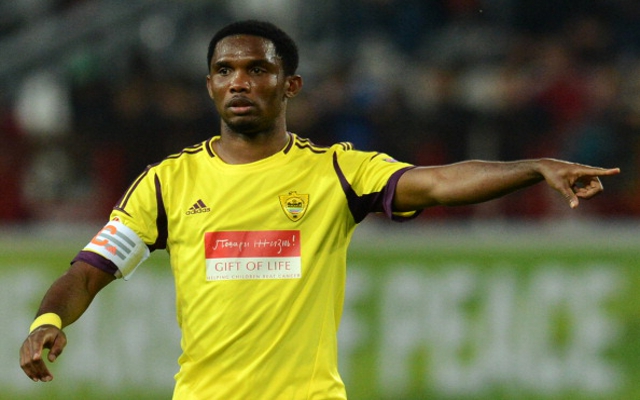 Whilst Eto’o is no spring chicken the 32 year old still has a few years in the tank and has not lost his scoring edge since moving to Russia, the lethal finisher managing 36 goals in 71 appearances for Anzhi.

Eto’o is clearly a striker with a rich pedigree, we are after all talking about a three time Champions League winner, and the Anzhi man could perhaps be keen on a first stab at Premier League football having successfully plied his trade in La Liga and Serie A.

Arsene Wenger is of course not known for investing in aging talent but could perhaps be willing to make an exception in this case. Clearly a move for Samuel Eto’o would cost a fair bit, both in transfer fees but perhaps more problematically also in wage demands.

Eto’o currently earns a whopping €20m a year after tax and he may well have to adjust his expectations if he is to secure a move anywhere, let alone to Arsenal.

At the Nou Camp Eto’o racked up 129 goals in 201 appearances, helping the Catalan side to three La Liga titles and two Champions League triumphs, one of which was of course against suitors Arsenal.

A move to Inter Milan saw Eto’o scored 53 goals in two seasons during which time he helped the San Siro side to a historic treble under the guidance of Jose Mourinho before a move to Anzhi in August 2011.