Arsenal are readying a British transfer record bid of £51m for want-away striker Luis Suarez according to the Daily Star.

The 26 year old forward is seemingly burning all his bridges with an Anfield side who still seem determined to keep hold of the Uruguayan, which is perhaps unsurprising given that he is the club’s most effective attacking weapon.

Having failed with two earlier bids the Gunners will be hoping it’s third time lucky and it would appear that Liverpool would struggle to turn down such an offer, unless of course another side were to enter the race for the prolific forward, who netted 30 goals in all competitions last term.

Luis Suarez attempted to ‘force the issue’ by voicing his concerns in an interview that was published in both the Guardian and the Telegraph yesterday morning and he was left out of his side’s pre-season friendly with Valerenga and it’s entirely plausible that he will never play for the club again, such have been the damning statements he has made in relation to promises he believes he was made with regards to a summer exit. 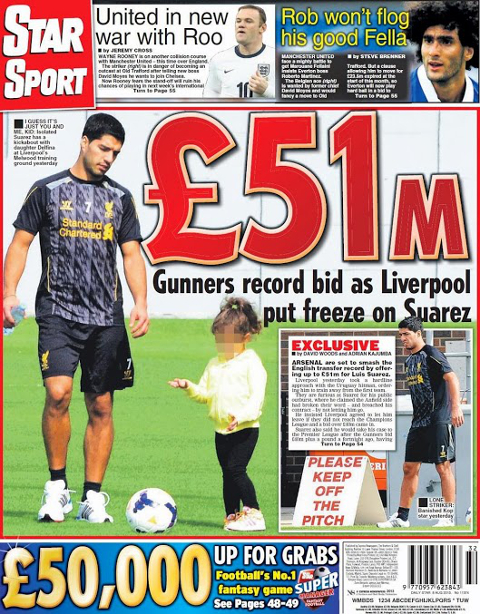 Arsene Wenger is yet to spend a single penny on summer additions but is said to have a hefty transfer war-chest, that has been boosted by the sale and release of much of the deadwood within his Arsenal squad, so the French boss may well elect to use the lion’s share of the money available to bring in Luis Suarez to beef up a strike-force that will currently depend heavily on Olivier Giroud, who managed just 11 goals in 34 Premier League appearances last season.

With the new season fast approaching Wenger would be looking to bring in requisite signings sooner rather than later, though clearly with six matches left of the ban handed to Suarez for biting Chelsea defender Branislav Ivanovic still to run perhaps urgency is not the key issue.

However alternatively if Liverpool do feel the necessity to sell Suarez they would presumably like to do so with enough time for Brendan Rodgers to use funds from the sale to help further boost a squad that has been handily improved in recent months.

The Northern Irish boss using funds from the sale of Jonjo Shelvey and Andy Carroll, two players Rodgers can certainly cope without, to cover the costs of signing Kolo Toure, Simon Mignolet and Spanish pair Iago Aspas and Luis Alberto, both of whom have impressed in pre-season action.