Arsenal are hoping to be able to tie up the shock £20 million capture of highly rated Paris Saint-Germain midfield player Marco Verratti before the summer transfer window closes on Sept 2.

The north London club have been heavily criticised by both their own supporters, and the media in general, over their lack of transfer activity in the close season so far, especially after chief executive Ivan Gazidis had promised at the start of the summer that the Gunners would be spending heavily on several big-name recruits ahead of the new Premier League, with a view to finally making a push for the title.

However, as yet the only new arrival at the Emirates has been young France front man Yaya Sanogo, who was signed from Ligue 1 outfit Auxerre on a free transfer at the start of this month.

Gunners head coach Arsene Wenger has, of course, been busy trying to lure wantaway Liverpool forward Luis Suarez away from Anfield in recent weeks, but it is expected that any potential deal to sign the coveted Uruguay international will not be completed until after the club have confirmed their safe passage into next season’s Uefa Champions League group stage on Aug 28. 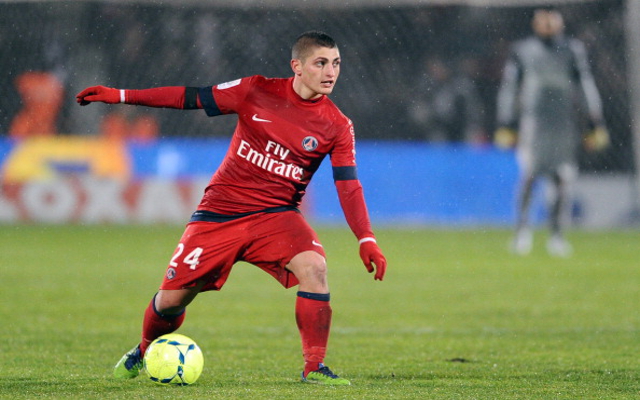 However, armed with a transfer war chest estimated to be worth a whopping £70m this summer, Wenger has been busy looking for alternative targets in recent weeks, safe in the knowledge that Suarez will be moving to the Emirates come what may next season.

And the Frenchman is understood to be desperate to strengthen in central midfield in the new campaign so as to be able to give injury-ravaged midfield playmaker Jack Wilshere less game time in the capital going forward.

Wenger is known to be hugely concerned that his young England international could break down again at any moment if he is given too much workload in the coming months, and that is a risk the manager is not prepared to take having already lost Wilshere for 14 months between July 2011 and September 2012.

Consequently, Wenger has made tentative inquiries with compatriot Laurent Blanc, who is now in charge of the Ligue 1 champions, to ascertain whether the big-spending Parisians would be at all willing to let the Italy international depart the Parc des Princes this summer.

And the noises coming out of the French capital this week have by all accounts been positive, with Blanc and Co understood to be happy to allow Verratti to move to Arsenal, for the right price that is.

The 20-year-old may have only just agreed a one-year contract extension with PSG, however, that renewal comes after several recent reports in both the French and Italian press had claimed that Verratti was unhappy at the French giants, and wanted to leave the club this summer to try out a new challenge in his career.

Wenger and Gazidis are both now expected to sit down with the Italian’s agent, Donato Di Campli, in Paris next week to thrash out personal terms on a proposed five-year contract worth £90,000 per week for Verratti in the capital next season.