Even though it was the first day of the  Hari Raya festival, 150 devout  Malaysian football fans chose to gather outside the One World Hotel.

Despite the religious festivities the dedicated  supporters travelled to the hotel to catch a glimpse of the Barcelona squad.

After 3 hours waiting patiently the fans got their reward, at 3-45pm  the full squad, with the exception of Carlos Puyol arrived.

Fans got a brief view of Messi, Neymar and co  as they were ushered into their hotel. 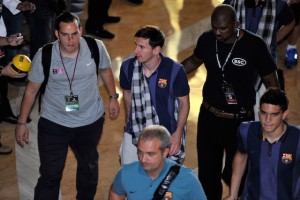