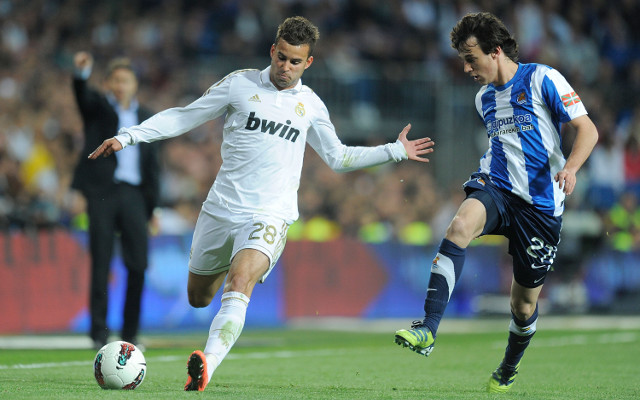 White Hart Lane side haggling with Bernabeu side.

Tottenham are keen on including either Jese Rodriguez or Alvaro Morata in a deal which see’s Gareth Bale join Real Madrid, according to the Mirror.

Madrid president Florentino Perez has been trying to seal a deal for Bale all summer, and has seen multiple bids turned down, the latest of which, £85million, has also been declined by Spurs chairman Daniel Levy, who has publically stated he is looking for £105million to art with his prized asset. Perez maintains that what he has offered is more than enough to sign any player, let alone Gareth Bale.

“€100million [£86million] seems a lot to me, a lot for everything.” Perez claimed, without referencing Bale because he “does not talk about names”. As a way of bringing down the fee, the clubs have been in talks about potential players to join the London club in a part-exchange deal. Looking to add some creativity, Spurs are keen on both Jese Rodriguez and Alvaro Morata to make the switch to the Premier League.

However, both players are keen on staying at the Bernabeu for the considerable future, and Rodriguez has recently penned a new four-year deal at the club, and does not wish to leave. Spurs have reportedly failed to convince Morata to join the club, but Madrid are willing to part with wing-back Fabio Coentrao this summer, available for just €15million, reports Spanish source El Confidencial.

If they lose Bale this summer, the club will have to act fast to replace his creative influence and goals in the side, which is why they wanted left-winger Rodriguez and striker Morata in any potential deal. They have already brought in left-sided player Nacer Chadli from FC Twente and striker Roberto Soldado from Valencia this summer, but with the uncertainty regarding the future of Emmanuel Adebayor and Jermain Defoe, Spurs are in the market for another attacker, regardless of the Bale situation.