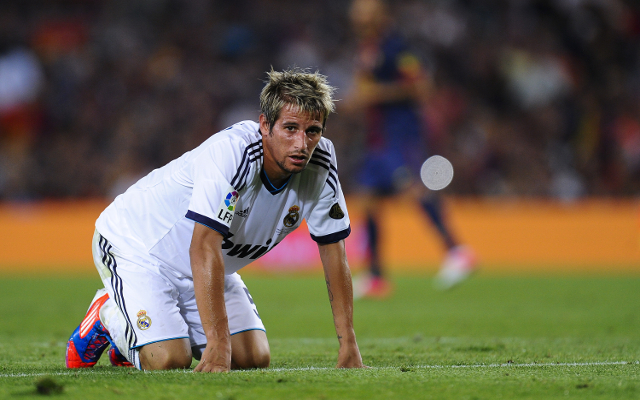 White Hart Lane side ready to bring in some more new faces.

Tottenham boss Andre Villas-Boas is looking to continue his White Hart Lane spending spree and will look to complete a £13m deal to sign Real Madrid wing-back Fabio Coentrao regardless of any interest the La Liga side have in Gareth Bale according to the Sunday People.

Villas-Boas has brought in an impressive level of additions thus far this summer, signing Brazilian Paulinho, Belgian winger Nacer Chadli and Valencia striker Roberto Soldado, spending around £50m in the process, and now the Portuguese boss is looking to bring in two more signings before the transfer window slams shut on September 2nd.

Real Madrid’s left sided player Fabio Coentrao apparently has a £21.5m release clause but Carlo Ancelotti is willing to accept £13m for the Portuguese international, who has had an up and down time of it since moving to the Bernabeu from Benfica.

Such a move would resolve Tottenham’s left-back problem area and in an ideal world Villas-Boas would perhaps be dreaming of a wide pairing of Coentrao with Bale ahead of him, though there is of course a great deal of speculation as to whether the Welsh international will remain at the club, with Real Madrid hovering. And with that eventuality in mind Villas-Boas has targeted Blackpool starlet Tom Ince as a possible replacement. The 21 year old former Liverpool man had an phenomenal season last term, scoring 18 goals and finishing the season as the Championship’s leading assist maker to boot.

Whilst clearly the England Under 21 international wouldn’t be a ready made replacement for Bale the youngster certainly has the potential to make a big impact in the Premier League if given the chance to shine.

Ince felt the need to leave Anfield for Bloomfield Road as he wasn’t getting enough playing time at Liverpool and any move back to the top tier would have to come with some sort of guarantee of regular action as the Tangerines won’t want to find himself warming the bench again.