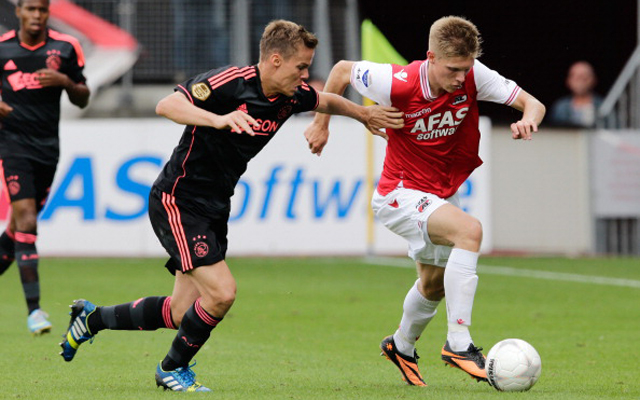 On the eve of his first ever trip with the USMNT, Aron Johannsson will hope he can translate his club scoring record to the big stage.

This weekend gave followers of the US men’s national team two reasons to be excited.

First of all, Aron Johannsson will be making his debut for his newly adopted footballing home when the USMNT travels to Bosnia on Monday. Second of all? He is proving a revelation for his club AZ Alkmaar, scoring yet again at the weekend.

If the Icelandic FA were upset at the start of the season when it was first announced that Johannsson would choose to represent the USA ahead of Iceland at full international level, they must be positively livid at this stage.

Johannsson’s equalising goal on Sunday afternoon against Eredivisie champions Ajax means the young forward now has three goals in three competitive games this season – six in seven if you date back to the end of the 2012-13 campaign.

Admittedly, Johannsson struggled for much of the match against imposing Ajax defensive duo Toby Alderweireld and Niklas Moisander. However, it was Johannsson who would have the last laugh as he calmly converted his penalty opportunity following a red card for Ajax left-back Ricardo van Rhijn.

Johannsson will have little time to celebrate his team’s fantastic upset though, as he flies out Monday morning to Bosnia where he will rendezvous with the USMNT for the first time.

Johannsson won’t be the only debutant though, with Klinsmann’s other high-profile steal John Anthony Brooks also set to earn his first cap. Having recently snubbed the German Under-21 side, young defender Brooks will pledge his allegiance to the USA by featuring for the full men’s team in their friendly against Bosnia on Wednesday.