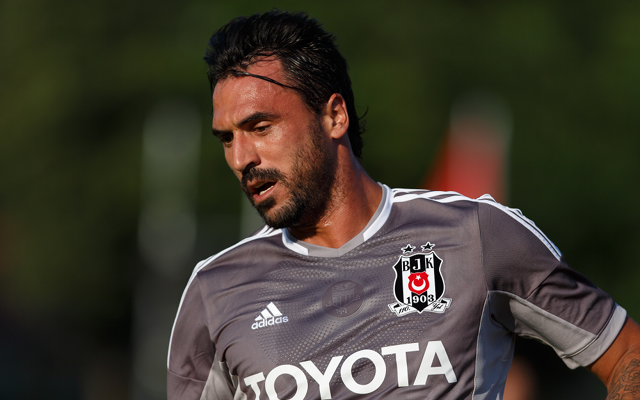 West Ham United are said to be looking into the possibility of signing Besiktas striker Hugo Almeida, talkSPORT reports.

Manager Sam Allardyce is said to still be keen on adding another striker to his ranks to partner Andy Carroll, and recent news that Carroll will miss the start of the new campaign with a heel injury has only furthered his need to bring a new hitman on board.

This has led to him taking a closer look at the Portuguese international, and he has been encouraged by the news that the Turkish giants would be willing to sell him.

The 29-year-old has previously suggested he would like to play in the Premier League is thought to be available for around £3 million as he enters the final year of his current deal with the Kara Kartallar.

Last season he managed to bag nine goals in 20 league appearances as he continues to be a regular fixture within the Portuguese national team.

Having broke through the ranks at Porto, he spent several seasons out on loan with a number of smaller Portuguese sides, but it wasn’t until he joined Bundesliga club Werder Bremen in 2006 that he began to fully establish himself on the world stage.

After four years with Werder where he scored 63 times in 176 appearances he made the switch to Turkey.

Loris Karius hoping to convince Liverpool to allow him to leave for free Apr 15 2020, 10:38
Liverpool FC