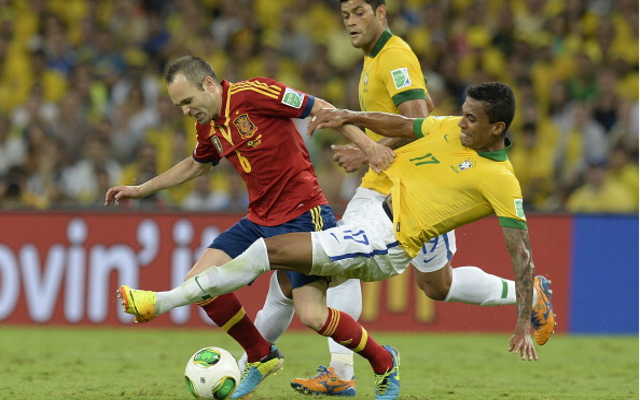 Serie A side line-up move to beat Arsenal in race to sign Brazilian.

The Serie A have already beaten the Gunners to long-term target Gonzalo Higuain this summer, who joined the Naples club in a £31million deal, despite strong reports that he had been set to sign for the Emirates Stadium side.

Bayern are demanding around £17million for the 26-year-old Brazilian international and have found suitors throughout Europe with clubs from Russia, Spain, Germany and England all interested in his services.

Arsenal boss Arsene Wenger is one of those keen to sign the Brazil defensive midfielder in order to bolster his midfield with Abou Diaby ruled out until Christmas time leaving only Spaniard Mikel Arteta to play the holding role.

Bayern have already confirmed that “Luiz has offers from England, Spain, Russia and Germany” before adding “the player has not made a decision, yet”.

However Italian reports today indicate that Napoli manager Rafael Benitez has entered the race with a guarantee of Champions League football for the former 1866 Hoffenheim man, something Arsenal can’t offer him given their tough two-legged play-off tie against Turkish side Fenerbahce.

Gustavo has fallen down the pecking order at the Allianz Arena following the arrival of Barcelona starlet Thiago Alcantara during the summer and he has now been made available for transfer by new Bayern boss Pep Guardiola.

A potential bidding war looks unlikely given the German’s side willingness to sell this summer and the player, who was not included for their opening league match against Borussia Monchengladbach on Friday, could now decide his own destiny based on the personal terms on offer.