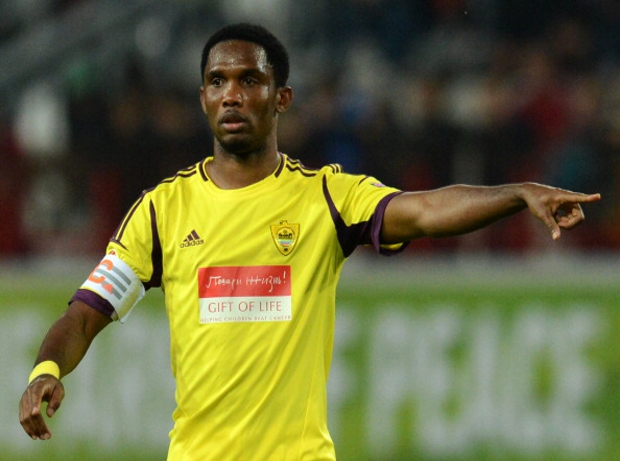 The 32-year-old former Barcelona and Inter Milan forward is just one of several players who Russian Premier League outfit Anzhi Makhachkala are trying to offload after their billionaire owner Suleyman Kerimov let it be known that he was cutting off funds.

Eto’o is currently the world’s highest paid footballer, earning an incredible £350k-a-week but given his relationship with Chelsea boss Jose Mourinho he could be willing to take a big paycut to sign for the Stamford Bridge side.

Chelsea have seen bids of £23m and £25m rejected by their Premier League rivals for Rooney and although Mourinho is considering testing United’s resolve with another offer it is likely to be dismissed out of hand by David Moyes who has insisted that Rooney will not be sold this summer.

Eto’o indicated he would be open to a move to reunion with his former Inter boss, by saying: “There is only one José Mourinho. I have played under a lot of great coaches – but there is no other character in the game like José.

“He is one of the best coaches in the world – and we had a lot of success together at Inter Milan. I would like to have the chance to play under him again because it is never boring when José is around. Chelsea are a great team. When we have all the offers on the table then I will discuss with my agent and see what my next step is.”

The Cameroonian international started his career at Real Madrid but struggled to shine at the Bernabeu and instead he moved to Real Mallorca. Impressive displays with the Balearic island side saw Barcelona swoop for his striking talents before a move to Mourinho’s Inter where he helped the Serie A side seal a historic treble until he signed for Anzhi in August 2011.