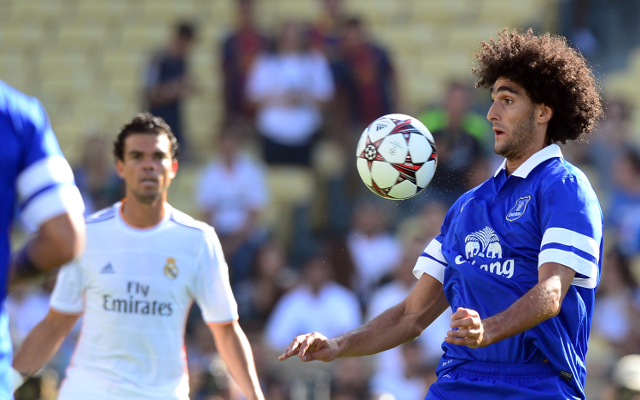 Everton have told Manchester United that they will have to cough up £30 million if they want to land star midfielder Marouane Fellaini, talkSPORT reports.

United boss David Moyes is growing frustrated at continually missing out on his previous midfield transfer targets Cesc Fabregas and Thiago Alcantara, respectively, and is now preparing a raid on his former club for Fellaini.

However, Moyes’ old club aren’t prepared to do him any favours and have told him that he will have to spend big if he wants to have any hope of landing the domineering 25-year-old.

Up until last month the former Standard Liege midfielder had been available for £22 million thanks to a release clause in his contract that has now expired, and Everton are now not willing to enter negotiations unless a fee of at least £30 million is put on the table.

Fellaini is thought to be keen on linking up again with his former boss at Old Trafford, but so far it remains to be seen whether the champions will be willing to meet the asking price, though it Moyes’ current rate of failure in the transfer market is anything to go by then it wouldn’t be a surprise if they did.