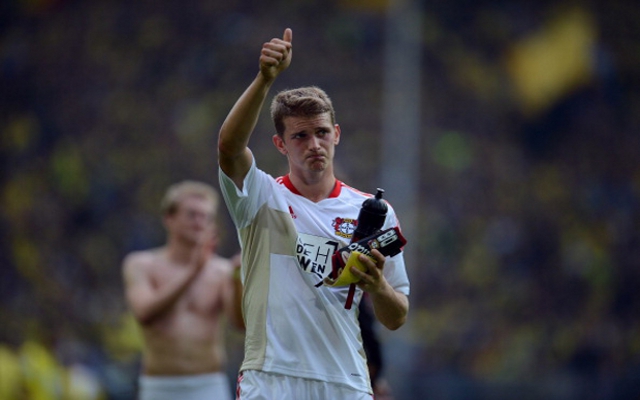 Arsenal are hoping to complete their first major piece of business in this summer’s transfer window by the end of this week, CaughtOffside understands.

With the Gunners widely known to be chasing a new defensive midfielder, it appears Bayer Leverkusen’s Lars Bender could be the new player on the North London club’s radar.

Arsenal were in for the German international earlier in the summer, but found their initial bid of around £19million rejected by the Bundesliga outfit. However, they now seem ready to improve their offer for him after hitting a snag in their attempts to sign Bayern Munich’s Luiz Gustavo.

The Brazilian has been linked strongly with a move to the Emirates Stadium for the last few days, but Arsenal are now thought to have pulled out of the running after Barcelona and Napoli entered the chase for the 26-year-old. Despite failing to establish himself as a regular at the Allianz Arena, Gustavo is a highly rated Brazil international, and Arsenal do not now fancy their chances of landing him against strong opposition, even though the player himself has said he would welcome a move to the club.

Wenger has also considered moving for Borussia Dortmund’s Ilkay Gundogan, another German midfield player who has attracted a great deal of interest this summer, but the 22-year-old has stated that he is happy to stay with the Champions League runners-up.

Arsenal will now submit an offer of around £22million for Bender, which Leverkusen are likely to accept. The signing should appease a large section of the club’s fans, who have been frustrated at a seeming inability to finalise some big-name deals so far this summer.

Bids for Gonzalo Higuain and Luis Suarez have both failed, and while Arsenal could still do with extra firepower upfront, they will also do well to add Bender to a midfield that has struggled defensively since last summer’s departure of Alex Song to Barcelona.

Bender, the twin brother of Sven Bender of Borussia Dortmund, has been at Leverkusen since 2009, and has played a key part in firing the team into the Champions League last season. He is also well established as part of the German national team, earning 14 caps and scoring 3 international goals to date, including featuring for Joachim Loew’s side at last summer’s European Championships.

His potential arrival at Arsenal could signal the death knell for Abou Diaby’s Gunners career, with the Frenchman initially entrusted as Song’s replacement, but failing to keep clear of injuries for much of his time with the club.