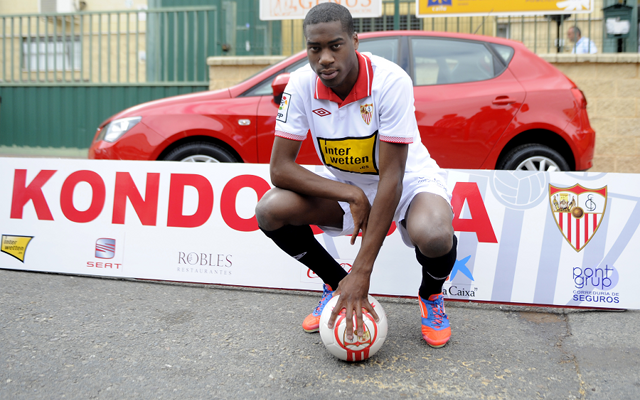 Geoffrey Kondogbia is among the most highly rated young players in Europe and has been linked with several top clubs this summer.

Sevilla president Jose Maria del Nido has said that Geoffrey Kondogbia won’t be leaving the club this summer, insisting that he has reached an agreement with a company that owns half of his rights, meaning he can stay at the club for another year, Marca reports.

Kondogbia is one of the most highly rated young players in Europe and has been linked with several top clubs this summer, including Arsenal, Manchester United and Real Madrid.

However, Del Nido claims that if a big club does want to sign Kondogbia, they will have to pay the players buy-out clause, which is set at 20 million euros plus VAT.

Kondogbia has been likened to former France midfielder Patrick Viera following a series of powerful displays during his first season at Sevilla.

Several clubs are interested in signing the Frenchman, however the midfielder is known to be happy at Sevilla and won’t move unless a club makes a big offer for him.

Sevilla have been beset by financial problems and have recently sold Jesus Navas and Alvaro Negredo to Manchester City but want to keep hold of Kondogbia for at least one more season.