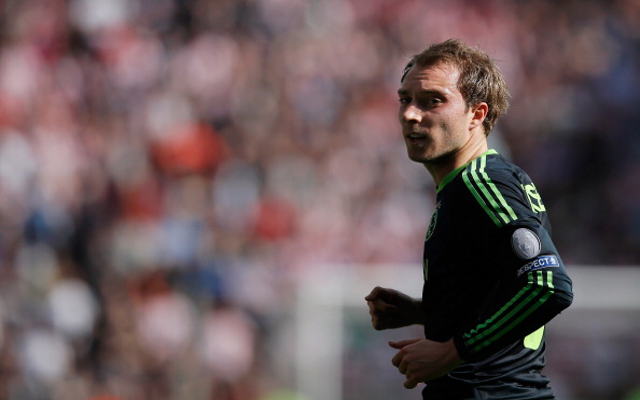 Arsenal could look into signing Swansea City’s Michu or Manchester City striker Edin Dzeko after being dealt the blow that Luis Suarez will stay at Liverpool.

Liverpool and Tottenham will face fresh competition from Italian giants Juventus for the signing of Ajax starlet Christian Eriksen.

Queens Park Rangers and Brazil goalkeeper Julio Cesar is confident of sealing a move away from the Championship club before the end of the summer. Manchester City manager Manuel Pellegrini is determined to land Real Madrid centre-back Pepe, and will make a bid of £20million for the 30-year-old.

Manchester United are ready to keep an unhappy Wayne Rooney at the club this summer after refusing to sell the England striker to rivals Chelsea.

Failure to land Rooney has seen Chelsea turn to Anzhi Makhachkala striker Samuel Eto’o as an option, with the 32-year-old also keen to link up with Jose Mourinho at Stamford Bridge.

Barcelona are to look elsewhere for a new centre-back after being told they would have to pay £50million for Chelsea’s David Luiz.

Napoli are keen on competing for Bayern Munich midfielder and Arsenal target Luiz Gustavo, with an announcement on the Brazilian’s future expected on Wednesday.

Another Anzhi Makhachkala player who could be on his way to the Premier League this summer is Brazilian forward Willian, who is a prime target for Liverpool.

Harry Redknapp is close to completing a move to bring Scott Parker from former club Tottenham to Queens Park Rangers, though Fulham could make a late bid to hijack the deal.

West Ham could look to add Chelsea misfit Demba Ba to their strikeforce and make the Senegal striker their sixth signing of the summer.

Arsenal trialist Sebastian Perez has not been granted a work permit to complete a permanent move to the Emirates Stadium. German side Werder Bremen are close to completing a deal for Wigan striker Franco Di Santo on a free transfer.

Chelsea youngster Wallace Oliveira dos Santos has joined Serie A side Inter Milan on loan for the 2013/14 season.

Liverpool and England star Steven Gerrard has tipped Arsenal midfielder Jack Wilshere for a bright future with the national team.

The Reds skipper also hinted that next summer’s World Cup in Brazil will be his last tournament in international football.