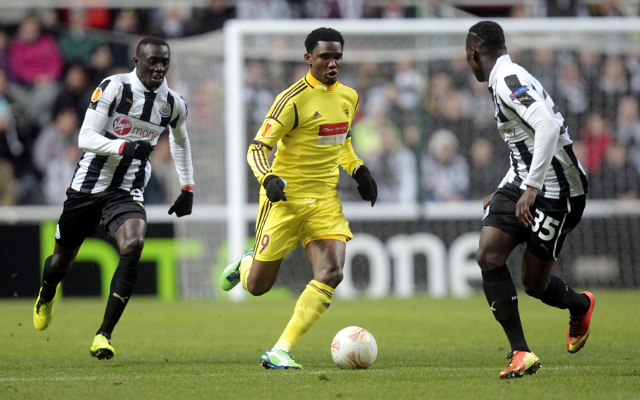 Eto’o is set to leave Anzhi Makhachkala after the Russian side placed their entire squad on the transfer list.

Chelsea have been warned that they aren’t the only English side to be interested in a move for Samuel Eto’o, with Manchester United also monitoring the strikers situation at Anzhi Makhachkala, the Daily Mirror reports.

The striker is currently Chelsea’s fall back option as the Blues chase Wayne Rooney despite Manchester United saying that the England international isn’t for sale at any price.

Eto’o is thought to be desperate to leave Anzhi after their billionaire owner Suleyman Kerimov pulled his financial backing of the club and the striker would love the opportunity of linking up with Jose Mourinho, following the pair’s time together at Inter Milan.

The 32 year old’s representatives have said that Italian sides Napoli and Inter Milan are tracking the striker but also mentioned an unnamed third club with interest in the striker.

Sources close to the player now claim that the third club is in fact Manchester United.

This has created some suspicion at Chelsea, with the club feeling that Eto’o is just trying to make them come to the negotiating table before they are ready.

While Eto’o knows he is a back-up option, he is desperate for a move away from Russia and is doing everything he can to bring forward a possible move to Chelsea.