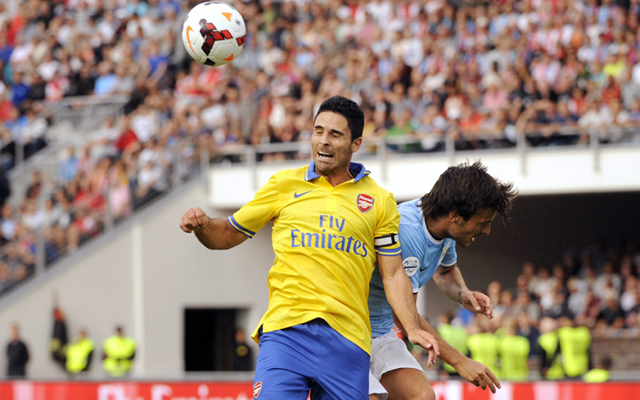 Arsenal have been hit by the news that club captain Mikel Arteta has been ruled out of action for up to six weeks after suffering a tear in his quadricep, according to reports in the Daily Mail.

The crucial Spain international had been sent for a precautionary scan on his thigh on Thursday, as revealed by Gunners head coach Arsene Wenger, after pulling up in training.

However, at the time the Frenchman thought the problem not too serious, and just a strain, only for the results to reveal otherwise on Friday, with now the midfield player set to be sidelined until September.

And that means that Arteta will be missing for a whole raft of the north London club’s opening Premier League fixtures, as well as the club’s crucial upcoming two-legged Uefa Champions League playoff against Turkish giants Fenerbahce later this month for a place in the competition proper.

Not only that, but Wenger is currently without the likes of  Belgium international Thomas Vermaelen, Spaniard Nacho Monreal and holding midfield player Abou Diaby all through injury, while key right-back Bacary Sagna also limped out of France’s friendly international with Belgium on Wednesday with an ankle injury.