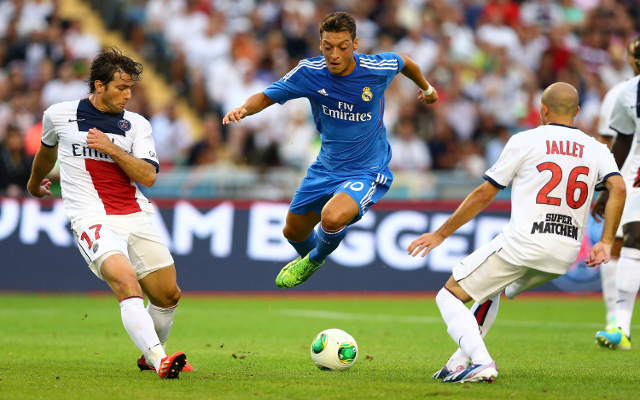 Manchester United are weighing up a potential bid for Real Madrid midfielder Mezut Ozil according to Spanish newspaper Intereconomia.

The Old Trafford club are known to be in the market for a new central midfielder having already missed out on Thiago Alcantara and Cesc Fabregas this summer.

Manager David Moyes is reportedly keen to bring in new blood in the middle of the park as he looks to stamp his mark on the team.

The United squad is somewhat short of options at centre midfielder following Paul Scholes’ retirement, the poor form of Anderson and the ongoing injury problems of Darren Fletcher.

That could pave the way for an audacious move for German international Ozil, with reports suggesting United are ready to make a bid of £40 million.

Ozil is reportedly concerned how the potential arrival of Gareth Bale will affect his first team chances and could ask the Spanish side to allow him to discuss terms with United.

Madrid may be open to allowing Ozil to leave as it could help to fund some of the £80 million plus that will be required to persuade Tottenham to sell Bale.

Ozil is also thought to be tempted by the offer of guaranteed first team football with United in preparing for the World Cup finals tournament next summer in Brazil.