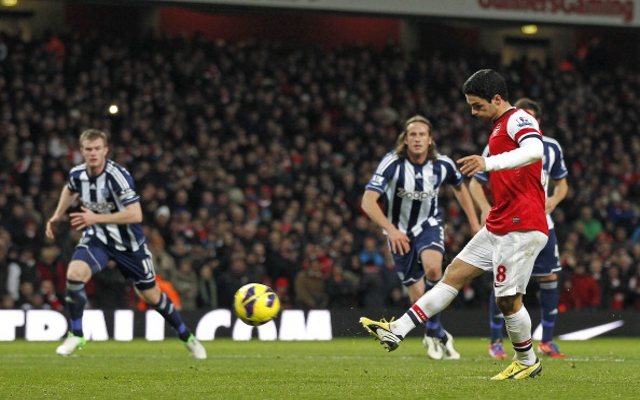 Midfielder believes Gunners can go all the way.

Arsenal midfielder Mikel Arteta has said that the club can make a serious challenge for the title this season as long as they bring in some new faces and find a level of consistency, Sky Sports reports.

Gunners boss Arsene Wenger has come under heavy scrutiny so far this summer after so far only managing to add Auxerre youngster Yaya Sanogo to the ranks, which was then followed by several high profile failures to capture Gonzalo Higuain and Luis Suarez.

Fans, however, are given cause for cheer by the 10 game unbeaten run the side enjoyed at the tail end of last season, suggesting that the squad are still capable of holding their own, though strength in depth is required if they are to make any sort of meaningful impact.

And Arteta, who will now miss the first six weeks of the season with a thigh injury, hopes to see more faces arrive before the transfer window slams shut on September 2nd, claiming that they need reinforcements badly.

“Last year, this squad wasn’t good enough to challenge for the league – we ended up too far behind Manchester United.

“We suffered a lot of injuries in the last few years and couldn’t always put out a consistent team for 10 or 15 games in a row.

“So we can’t ignore the speculation about new signings, because it’s in the papers and we are asked about it all the time.

“I’m convinced there will be signings this summer. We already have a very strong team – and if we get new faces they will be welcome.”

Arteta added on Arsenal’s lofty ambitions for 2013/14: “You all know Arsene Wenger – and I can tell you he’s not happy just to finish in the top four.

“When you get to a stage in the season where you are 12 or 15 points behind the leaders, you have to be realistic and admit you can’t catch up.

“That’s when the target becomes qualifying for the Champions League again. But at the start of the season, the only aim of the club, the manager and the players, is to win the league. It’s normal that the fans get frustrated – when you play for Arsenal you demand to win trophies every season – and we haven’t done that for eight years.

“We started very slowly in the last two seasons – life is very difficult when you are already trying to catch up eight or nine points in October or November.”