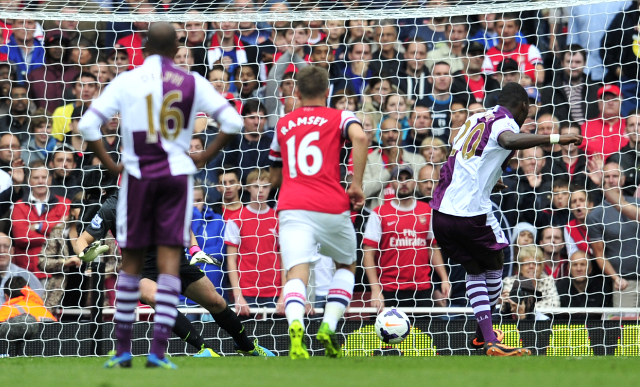 Christian Benteke netted twice as Aston Villa came from behind to beat ten man Arsenal at the Emirates Stadium.

Arsenal endured a calamitous start to the Premier League season after conceding two penalties and having Laurent Koscielny dismissed in a 3-1 home defeat by Aston Villa on Saturday.

Christian Benteke, Villa’s top scorer last season with 19 goals in his debut campaign, was the architect of Villa’s shock win, scoring twice to puncture the pre-season optimism at the Emirates Stadium.

Olivier Giroud gave Arsenal a sixth-minute lead by clipping home a left-wing cross from Alex Oxlade-Chamberlain, but Benteke equalised in the 22nd minute.

Arsenal goalkeeper Wojciech Szczesny was penalised for tripping Gabriel Agbonlahor and although he redeemed himself by parrying Benteke’s spot-kick, the Belgian striker reacted alertly to head in the rebound.

Benteke put Villa ahead from the spot with just under half an hour to play after Koscielny was adjudged to have fouled Agbonlahor, and the Frenchman’s misery was compounded moments later when he was shown a second yellow card for an untidy lunge at Andreas Weimann.