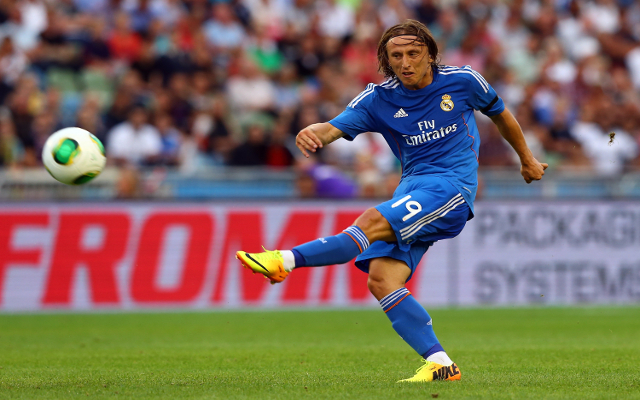 Real Madrid midfielder Luka Modric is eyeing up a return to England with Manchester United this summer, according to the Sunday Mirror.

United manager David Moyes is desperate to add to his midfield options this summer, and wants to sign Luka Modric from Real Madrid this summer. Modric was rumoured to be part of a world record deal which saw Tottenham’s Gareth Bale join Madrid, but he has rejected the chance to join his former club.

Spurs are keen on resigning Modric this summer, but the player has no interest in returning to White Hart Lane, but is understood to be interested in a move to Manchester as an alternative. Real Madrid manager Carlo Ancelotti has already stated that he has no plans to sell Modric this summer, but may be forced to sell if they receive a large enough offer.

Moyes is desperate to bring in some midfield additions this summer, after failing with a bid to sign Thiago from Barcelona. He remains interested in bringing Cesc Fabregas back to the Premier League, but deems Modric a more realistic option. Wanting to bring in two midfielders this summer, he is also lining up an £18million bid for former player Marouane Fellaini.

With a midfield that lacks real creativity, the 27-year old Croatian would bring an attacking spark to the midfield alongside Michael Carrick. The Reds are believed to be considering a £25million offer for Modric, as they are yet to make their interest official.