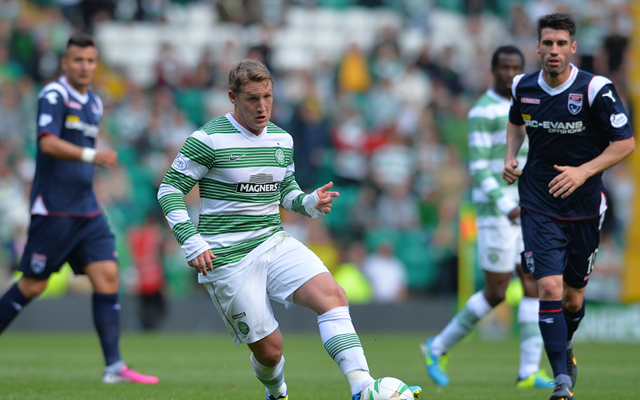 Celtic star Kris Commons has called on manager Neil Lennon to start splashing the cash on improving the squad if they hope to stand any chance of mounting a significant challenge in Europe this season, Sky Sports reports.

Lennon has already brought in Derk Boerrigter, Steven Mouyokolo and Virgil van Dijk this summer but has yet to find replacements for Victor Wanyama and Gary Hooper, who joined Southampton and Norwich respectively for a combined fee of around £18million.

However, they have so far been stumped in attempts to bring in the likes of Alfred Finnbogason, Teemu Pukki and Marko Arnautovic as they look to strengthen before the transfer window closes at the start of next month.

And the former Derby and Forest midfielder has stated that it is imperative some significant additions are made if they are to realise their ambitions both domestically and in Europe.

“We need to add more quality,” said the 29-year-old. “If we pick up injuries in certain areas, we will be down to the bare bones. I know the manager and everyone behind the scenes are doing all they can.

“It would have been stupid not to take the money for Victor, and Gary wanted to play Premier League football. I’m hoping the money we have brought in means we can buy quality players who are going to make us better or, if not, get us up to the standard we were before we lost them.

“We do need to invest in good players. There is no point bringing guys to build the squad, we need to bring in the right ones. From a players’ point of view, you want to see the club bring in people who are going to improve you straight away.

“The manager wants success and improvement every year. We want 90 points, we want the Treble, we want the Champions League. That’s our aim.”