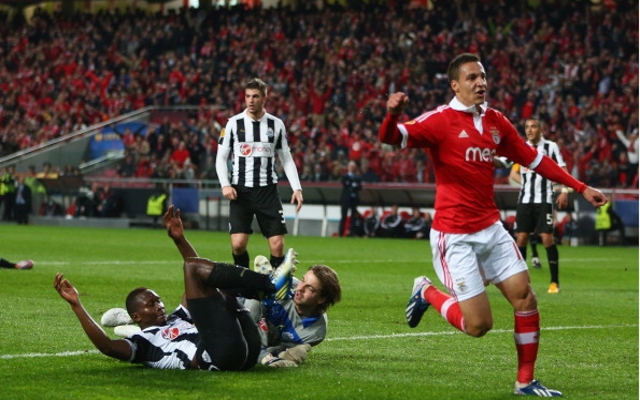 Chelsea are weighing up a bid to sign highly-rated Benfica forward Rodrigo this summer, according to Portuguese source A Bola.

Benfica signed Rodrigo for €6million from Real Madrid back in 2010, when Jose Mourinho was in charge, so he is aware of the talents he has. Having scrapped a buy-back clause of €12million, Rodrigo has impressed since leaving Madrid, and has become an important part to their league success, as well as the Spanish youth set-up.

The 22-year old is a reported €20million target for Chelsea, who look to add to their attacking options. Le 10 Sport claim that Rodrigo is seen as an alternative to Manchester United striker Wayne Rooney, after the Blues have seen two bids, the most recent of which being £30million, turned down for his services.

With Demba Ba falling further down the Chelsea pecking order, and could be offloaded this summer, Mourinho wants to bring in another forward to compete with Fernando Torres and Romelu Lukaku. Rodrigo has Premier League experience with Bolton during the 2010-11 season, but failed to impress, scoring only one goal during his loan spell.

Chelsea have made enquiries into signing the Spaniard, but Benfica are not willing to sell one of their key players. However, the club are considering selling unsettled Paraguayan striker Oscar Cardozo. The 30-year old attacker is looking to leave Portugal this summer, and Premier League side West Ham are considering making a move to sign him.