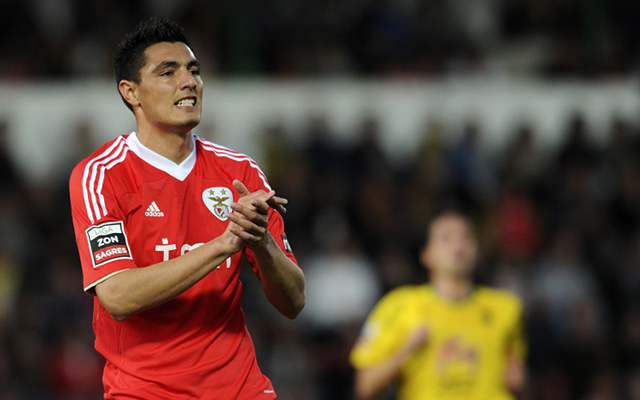 West Ham are considering an audacious move to sign Benfica striker Oscar Cardozo this summer, according to talkSPORT.

The Paraguayan striker is reportedly unhappy with his situation at Benfica, and is eager to move away from Portugal this summer. Hammers boss Sam Allardyce is keen to add firepower to his squad, and see’s Cardozo as a potential addition before the end of the window, but the main stumbling block in the deal would be his wage demands.

Sky Sports claims that following a rift between the club and the player, the 30-year old attacker is seeking a move away from Benfica this summer and is aware of the interest in him. “I thank the fans for always being with me,” Cardozo told A Bola. “But, after everything that has happened, it will be very hard to find motivation to continue. My head is far away from Benfica.”

Cardozo has been linked with moves to Cardiff, Spartak Moscow and Fenerbache this summer, and now West Ham. Sam Allardyce wants to add firepower to his attacking options, with only Modibo Maiga fit enough to play right now, with Andy Carroll out injured. However, their pursuit of Cardozo hinges on whether they can offload one or two players to open up enough wages for him.

The Daily Star report that Maiga could be the man to leave the club, after St Etienne president Roland Romeyer admits an interest in the 25-year old striker, who has failed make an impression at West Ham. Midfielder Ricardo Vaz Te has also been made available this summer, with Nottingham Forest keen on signing him.