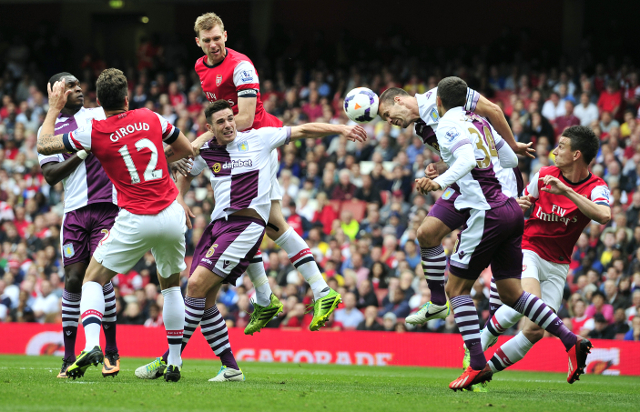 Aston Villa captain Ron Vlaar has said that there is no way that there will be a repeat performance of last season’s 8-0 drubbing at the hands of Chelsea as the two sides prepare to meet later this week, the Daily Mail reports.

Paul Lambert’s men will travel to Stamford Bridge on Wednesday full of confidence following on from their impressive 3-1 victory over Arsenal on the opening day and the 28-year-old has insisted that the players are ready to banish the ghosts of that awful night in December last year.

The game has had to be brought forward due to Chelsea’s involvement in the UEFA Super Cup and Vlaar has said that he is already looking forward to the encounter.

“If you can win at the Emirates, of course it is a great start,” he said.

“We want to do it again on Wednesday now.

“We all know (remember) what happened last year, so we want to put that to rest.”

He added: “We learnt a lot and we still have to learn a lot, but mentally we became a stronger team.

“We need everybody, all 25 players because it is a long season.

“The spirit is there in the group and that is the most important thing.

“To come back from an early goal was very good, and it was more than a win for us.

“You know when you play in eight days against Arsenal, Chelsea and Liverpool, that it could be a little easier, but it is the start of the season and nobody really knows a lot about each other, and what will happen from now.”