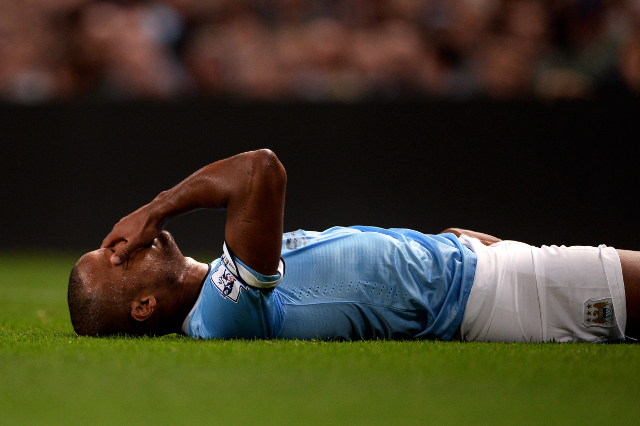 Vital Belgium set to be sidelined for the next fortnight.

Manchester City have suffered an injury blow with the news that captain Vincent Kompany could be out of action for the next two weeks after being forced to leave the field during the club’s opening-night 4-0 win over Newcastle United at Eastlands on Monday, according to reports in the Independent.

The experienced Belgium international defender suffered a hamstring strain during the second half of City’s convincing victory in the north west, although after the match had ended, new head coach Manuel Pellegrini attempted to play down fears that the 27-year-old would be out of action for a long period of time.

“Kompany we will see how he is when the doctor sees him,” said Manuel Pellegrini.

“I can’t tell you exactly what happened, but it is not a serious injury and will possibly be one or two weeks.”

The injury to the centre back was the only bit of bad news though for the Chilean, who was taking charge of the big-spending Premier League outfit in a competitive match for the very first time against Alan Pardew’s side.

And his night could not really have gone any better whatsoever for the experienced former Villarreal, Real Madrid and Malaga boss, with his side taking an early lead through David Silva’s near-post header, before further strikes from Sergio Aguero, a Yaya Toure free kick and Samir Nasri completed a convincing victory for the home side against their ten-man opponents.