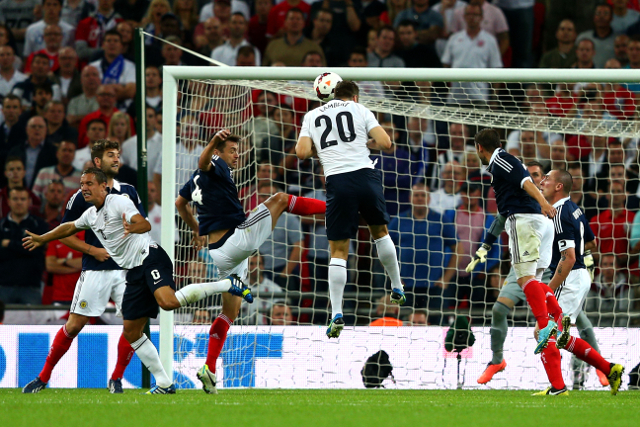 Southampton striker Rickie Lambert is the subject of interest from West Ham United and Reading following the club record arrival of Pablo Osvaldo at St Mary’s according to the Metro.

The former Bristol Rovers forward has been making all the headlines as he enjoyed a dream week. He celebrated the birth of his daughter, then scored the winner with his first touch on his England before converting the decisive penalty to secure Saints’ first three points of the season against West Brom on Saturday.

The experienced striker impressed last season during his debut campaign in the top-flight, hitting 15 goals in his 38 Premier League matches for the Saints to end the season as the highest scoring Englishman in the league.

However Southampton boss Maurico Pochettino has now recruited Italian international striker in a £15million deal from Roma and the forward, who worked with the Argentine boss at Espanyol, won’t be at the south coast to play second fiddle to Lambert.

This could leave Lambert struggling for regular football in Pochettino’s solo striker system and with ambitions to continue to feature in Roy Hodgson’s side with an eye on the upcoming World Cup he will want to be playing every week.

West Ham manager Sam Allardyce is reportedly searching for a new striker partner for Andy Carroll and after he tried to bring the 31-year-old to Upton Park in January he could move again for Lambert before the transfer window shuts.

While Reading’s Nigel Adkins is keen to see a reunion with Lambert at the Madejski Stadium. The former Scunthorpe manager signed the striker from Bristol back in 2009 and he has since netted 104 goals in his 197 games for the south coast club.