Everton and Arsenal are both set to go head to head for the signature of Manchester City midfield player Gareth Barry this summer, according to reports in the Daily Telegraph.

The veteran England international has already been informed by recently appointed City head coach Manuel Pellegrini that he has no future at Eastlands this season following the club’s capture of  Shakhtar Donetsk midfield player Fernandinho earlier this summer, with the some-time Brazil international playing in the same role in the team as Barry.

As such the 32-year-old, whose current contract at City now only runs until next June, was not even included as part of the club’s match-day squad for their opening Premier League fixture of the new campaign at home to Newcastle United on Monday night. 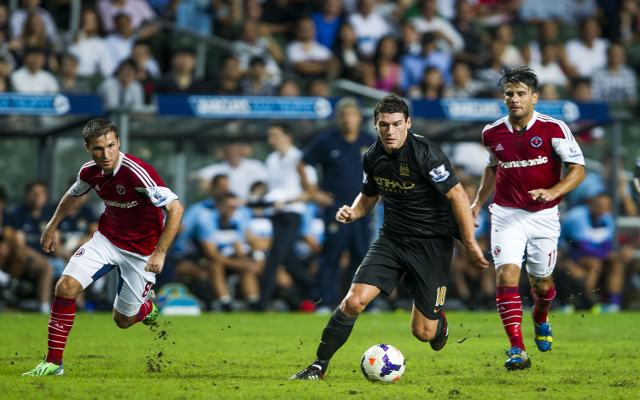 And now Barry must weigh up whether to move on loan to either Goodison Park or the Emirates before the close-season transfer window closes finally for business on Sept 2.

However, the Toffees are understood to be struggling to meet the Englishman’s £100,000-per-week wages at present, while Gunners boss Arsene Wenger is said to have not decided fully yet whether to move for the player or not this summer.

And that delay may give Everton manager Roberto Martinez an advantage in his efforts to persuade Barry to move to Merseyside, especially with the holding midfield player desperate to be playing regular football this season so as to add to 53 England caps and take part in next summer’s World Cup in Brazil.