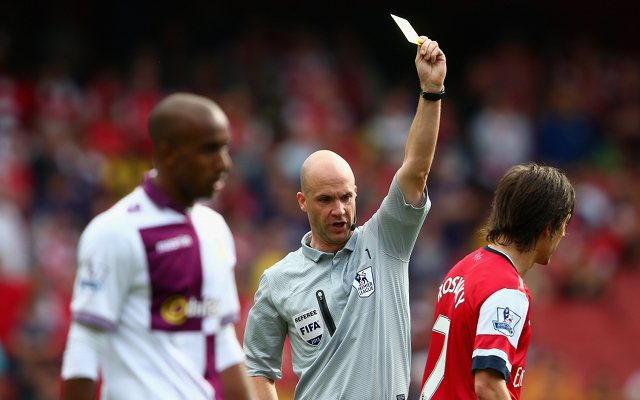 Referee backs colleague and claims he was right.

Taylor awarded two penalties to Aston Villa during their 3-1 conquest of the Emirates, one of which resulted in a red card for Gunners defender Laurent Koscielny, though he spared goalkeeper Wojcieh Szczesny his marching orders.

Gallagher highlighted that the Polish stopper didn’t warrant a red card for bringing down Villa speed demon Gabriel Agbonlahor by saying; “If you’re going to send somebody off, then it’s got to be absolutely clear and obvious and that wasn’t.”

When asked if Koscielny was unlucky to concede Arsenal’s second spot kick, leading to his first yellow card, Gallagher admitted it was a tough call to make, but added that from Taylor’s view it looked like a penalty and in those instances you have to go with what the referee’s decision.

Taylor has subsequently been dropped for any Premier League action this weekend as his decisions baffled all involved. Arsenal feel as though a red card should have been shown to Villa skipper Ron Vlaar for a second bookable offence, but the Dutchman was spared.