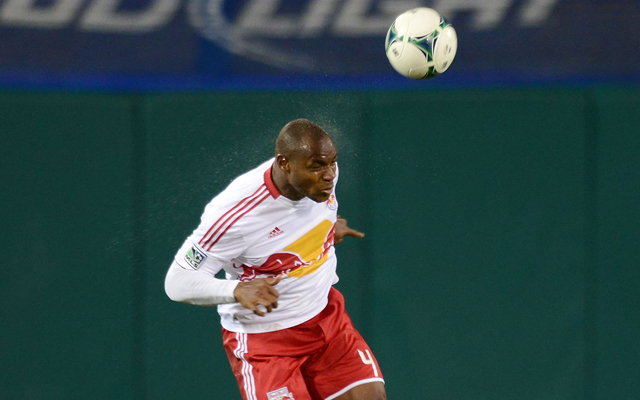 New York Red Bulls centre-back Jamison Olave will be out for two weeks after tearing a quadriceps tendon.

Soccer by Ives reports that RBNY head coach Mike Petke confirmed the defender picked up the injury during his side’s 0-0 draw with Philadelphia Union on Saturday.

After coming off late during his side’s draw at Red Bull Arena for Brandon Barklage, an MRI scan revealed that Olave had indeed suffered a mild quad tear and will miss RBNY’s next match against Chivas USA, if not the following match at home to DC United as well.

“It’s a mild tear, it’s not a huge thing, but we’re expecting 10-12 days, which will obviously take him out of the Chivas game,” said Petke. “We definitely didn’t want this but we were going to be having to rest Olave at least a game or two so perhaps [this is the time] to rest his injury right now and perhaps his body because he’s been playing a lot for us.”

Petke also confirmed that Ibrahim Sekagya will fill in for Olave during his spell on the sidelines: “Something we’ve loved about Ibrahim since he’s been here is, with his experience and where he’s played, he reads the game incredibly well,” said Petke. “There was some talk and a little whisper about age and this and that, but he reminds me of Robin Fraser a bit the last three, four years of his career when perhaps he lost a step from years past but his knowledge of the game is so good that he puts himself in great positions.

“I thought that he did well in that aspect. With the ball at his feet, it’s a great feeling for us to have knowing his capabilities of building out of the back, his vision, and we’re very happy with the way he played.”